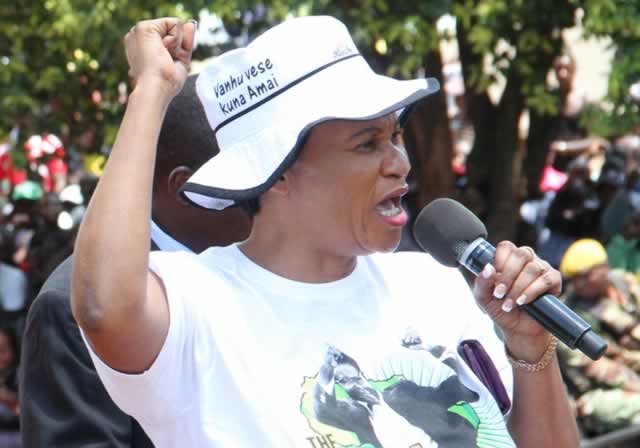 Former Zanu PF women’s league treasurer Sarah Mahoka became one of the first ruling party top officials to push the G40 onslaught against President Emmerson Mnangagwa before he was briefly pushed out of the ruling party.

As the battle to succeed former president Robert Mugabe turned into high drama, Mahoka was fired from the women’s league by then first lady Grace Mugabe.

However, in a curious turn of events Mahoka is now the chairperson of the National Patriotic Front (NPF) women’s league. The NPF says it is fighting to restore Mugabe’s legacy after he was toppled by the army last year.

Mahoka is one the former senior Zanu PF officials now spearheading the party linked to Mugabe and his wife.

Chief reporter Everson Mushava (EM) yesterday spoke to Mahoka (SM) to establish her relationship with Grace and her foray into opposition politics.

EM: Grace Mugabe fired you from the Zanu PF women’s league last year, but you are now part of the NPF leadership. How did your relationship with the former first lady breakdown and how was it mended?

SM: I had no problem [with her], but Lacoste lied to Mai Mugabe and persuaded her to fire me.

But all the people who were fired by Amai Mugabe were retained except me.

Amai Mugabe called me in the presence of Letina Undenge and apologised to me, admitting she had been fooled by people who lied to her.

She said she was apologetic because people lied to her.

She said she was told that I was given money by Prophet Walter Magaya, but had realised that I was never given a cent.

I was there at church because Mai Mugabe sent someone asking me to go to church, that is why I was at Magaya’s service.

They lied I was given money for hiring buses by Professor Jonathan Moyo, who has since absolved me.

I never had a problem [with the former first lady], but it was Lacoste that advised Amai Mugabe to fire me. That is why Lacoste refused to readmit me when they readmitted others. Amai Mugabe cleared herself.

EM: Do you think Zanu PF can forgive you after all those things you said about Mnangagwa at rallies?

SM: But what I said, if you listen to the video clip, is what eventually happened.

He [Mnangagwa] took power last November, no one voted him into power.

I challenged him to come out openly and that he also wanted to be president and that is what he eventually did.

Declaring interest is not a crime, not to lie to people. What I challenged him about is what he eventually did.

EM: Do you have regrets about what you said now that Mnangagwa is the president?

SM: I actually want to say it even today. I don’t regret because what I was saying was the truth and even Mnangagwa knows that.

Even today, I always say the truth. Mnangagwa is my brother, I was telling him the truth.

If he thought Mugabe was old, he was in the presidium and he should have told him. He was not saying that, but decided to grab power.

EM: Many people thought you wanted Grace to take over from Mugabe. What was your game plan?

SM: I even said that day that Mai Mugabe will never rule. I said we never said she will lead the country, but she was the leader of the women’s league.

I am not a fool, am very normal. Why would I say Amai Mugabe should take over when VaMugabe was still in charge?

Even when they said they are targeting criminals around the president, I have not seen any criminal except [former Home Affairs minister Ignatius] Chombo, who is not yet tried and convicted.

So all the tanks came out for one person? I was here at home; I have never stolen anything from government.

EM: So what is your relationship like with Grace?

SM: Very good, she is my first lady, not the president, the president is Cde Mugabe, he was the one voted for by the people.

EM: There are reports that you have been receiving threats from security agents over your relationship with NPF. What is the nature of those threats?

SM: I don’t know what is happening. I am informed that these Lacoste people are moving around tracking my movements.

They send people to my farm; they want to steal my cattle, my tobacco and my life.

I have done nothing to them, they are the ones who fired me from the party. I stayed home and what is troubling them? Is it because we now have our new party NPF? I don’t know why they are panicking.

They are moving around intimidating people. Victor Matemadanda [the Zanu PF secretary for war veterans] came here to address Zanu PF supporters at Tengwe, he was threatening people.

Pronouncing other people’s names when you are campaigning doesn’t make sense.

I was never in government and I have never stolen anything. It is a shame for him to come and say Mai Mahoka this, Mai Mahoka that.

If you see grown-up men with big bellies coming here addressing people about Mai Mahoka, it’s a sign that they are afraid of me.

They are having sleepless nights fearing a woman.

EM: You said some unidentified men have been frequenting your farm. What have these people said to you?

SM: They will be wandering at the farm and sometimes rest at the shops. They don’t say or do anything. That is why I have reported the matter to the police.

EM: Have you had any feedback from the police since you reported?

SM: No, they have not come back.

EM: There are also reports that some senior Zanu PF officials have been trying to persuade you to rejoin the ruling party? Who are they and what are they promising you?
SM: Yes, I was called by Mable Chinomona. She said they were working on my issue.

She said she was happy that three months after I was fired from the party, I was quietly staying home.

And indeed I was staying home because I have already covered my campaign for the past 10 years I was the MP I did tangible things in my constituency.

She called me saying that they were working on my case so that I go back to Zanu PF.

I was already with the NPF and when she called me, the previous day, I had been harassed at the airport upon return from a trip with my business partners.
My passport was confiscated and I was forced into an office where I was harassed.

EM: Do you still want to go back to Zanu PF?

SM: I will never go back to Zanu PF, there is nothing there. Farmers are struggling to get their cash at the tobacco auction floors.

We are given $140 bond notes and US$140. Sometimes you are given coins in very small denominations like 5 cents that are difficult even to put in a hand bag.

If you want to convert them into US dollars, you are charged very high interest rates.

But if you go to Harare’s 4th Street, you see new bank notes.

That is where our bank now is. Who is putting those bond notes at 4th Street?

People come to buy our tobacco with US dollar notes, where is the money going?

The money we are given is not enough for the farmers to do anything. If you see, farmers are not able to buy even beds; things are getting worse and worse.

EM: But were you fired from the party by Lacoste or it was former first lady Grace Mugabe?

SM: All the people who were fired by Grace, when Lacoste came in, they were readmitted to the party except me.

They fired me. Grace never recalled me from Parliament. I was fired at congress; Patrick Chinamasa called my name out when he read out the list of people fired from the party.

After that, I was recalled from Parliament by Chinomona. If they said they did not fire me, it means they do not know who Sarah Mahoka is.

My name is even there in the Hansard, I was recalled.

EM: What do you think of Mnangagwa and Zanu PF’s chances in the next elections?

SM: There is nothing for him; they will have to grab power again, that is what they are good at.

Mnangagwa will never win in a free and fair election. Right now, they are sending operatives from the President’s Office to threaten people.

Even Matemadanda told people at Tengwe that soldiers would be released to beat up people. He came here to shout at people. Is he the only person who is good?