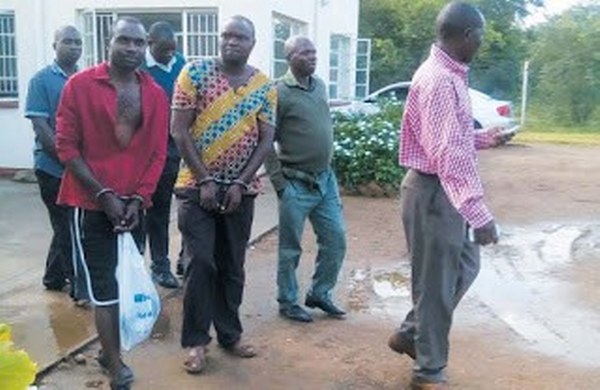 Three suspected serial thieves from Rutenga growth point were last week arrested after a long reign of terror which had wearied the community.

Philip Ziga (36), Takunda Chimbo (23) and Bernard Mlambo (28) were not formally charged of unlawful entry when they appeared before magistrate Honest Musiiwa but they were remanded in custody pending trial on April 30.

The State is expected to allege that from January to April this year, the three connived and unlawfully entered into 17 different premises and took away various property including flat screen televisions sets, other electrical gadgets, mattresses and cell phones.

Ziga and Chimbo, who are both self-employed builders, used to visit their victims’ homesteads pretending to be looking for work but they would later on return during the night to steal.

One of the victims is said to be a pastor whom the suspects visited during the day for prayers, only to return at night to steal.

Upon waking up to find his house burgled, he immediately alerted detectives who swiftly carried patrols and found Mlambo, who is a known vendor during the day, carrying some of the stolen goods on his way to the bus stop.

After being questioned, Mlambo spilt the beans leading to the arrest of the other suspects. Some of the stolen properties were recovered at the accused’s respective homesteads.

Night of fun out turns into a night of domestic violence as soccer star...

Sports Edmore Huni - 17 July 2021 0
IN a fit of rage, Highlanders star player Winston Mhango (32) ran amok and hit his wife with fists and a bottle over a...

News Cynthia Goba - 17 July 2021 0
A WOMAN found out that her husband had been having an affair with their neighbour for seven months and even got her pre_gnant. Instead of...

Latest on Kwekwe soldier Tatenda Mutema who was found with big snake in car,...

News Muza Mpofu - 17 July 2021 0
A Kwekwe man who was found in possession of a snake in his vehicle, bringing business to a standstill in the city centre on...

‘I enjoy mastur_bating more than having se_x with my wife’

Ask Auntie Muza Mpofu - 17 July 2021 0
A 32-year-old married man has been mastur_bating since his childhood and he continues doing so after marriage. Times Of India reported that the unidentified man...

HAUNTED HOMES: My maid saw a ghost in broad daylight, at night I used...

News Muza Mpofu - 17 July 2021 0
FOR some, haunted houses are just a myth while others have had first-hand experience of frightening encounters. Stories have been told of houses which have...