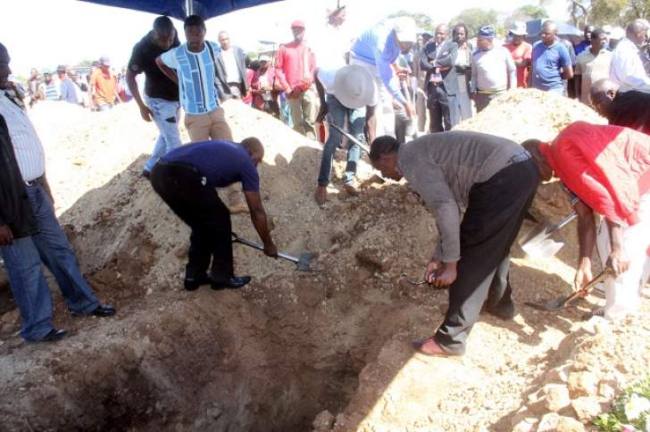 A POPULAR cross-border transporter (umalayitsha) Bongani “Bongo” Ndlovu who was killed at a Bulawayo nightspot recently was buried yesterday at West Park Cemetery in the city in a highly emotional ceremony.

Two of the suspects, Adrian Mguni and Ndebele, have appeared in court facing a murder charge. They will appear again today.

A service was held at Doves Funeral Parlour in the city centre. The atmosphere was sombre with relatives and friends sobbing uncontrollably, some almost collapsing during body viewing.

Sixth Avenue and Josiah Tongogara Street where Doves Funeral Parlour is located became a no-go area as mourners’ vehicles blocked the road. Ndlovu is survived by a wife and four children.

Family spokesperson Mr Hillary Ndlovu-Tshuma said they were still struggling to accept that Bongo had died.

“We hope that justice will prevail and the murderers will be dealt with. None of his killers’ relatives ever came to show remorse or mourn with us after what their children did,” he said.

“It makes me sad that it’s like they killed a cow and it’s business as usual to them. Bongo was a transporter, businessman, and a fast thinker. We are saddened by his sudden passing,” he said.

Speaking on behalf of omalayitsha, Mr Perci Masuku said Bongo was the one who had shown him the new nightspot, a day before his death.

“I was with him, the day before he died and he was supposed to go to South-Africa, but he kept on dragging his feet and ended up not travelling. He left his bag in my car and I left it at the Lounge and the following day (Saturday) he came to collect it and disaster struck,” he said.

Bulawayo police spokesperson, Inspector Precious Simango said Adrian and Ndebele were with Thamsanqa Mlalazi and Mhlanguli Mguni drinking beer when an argument arose with the deceased and it later degenerated into a fist fight. “The four teamed up to assault Bongani Ndlovu who managed to escape in the company of a security guard and headed for Bulawayo Central Police Station to make a report but before he got there, he fell down and became unconscious. He was pronounced dead upon arrival at the United Bulawayo Hospitals,” said Insp Simango.

News Cynthia Goba - 26 October 2020 0
An illegal mining expedition turned into a tragedy after a woman from Gachiti village near Perirendava area under Chief Bota died after a mine...
Loading...