MDC Alliance’s overwhelming support countrywide has frightened President Mnangagwa and his deputy Constantino Chiwenga to the extent of them having to literally steal and smuggle the Alliance program of action for a better Zimbabwe into Zanu PF election manifesto.

The Alliance national spokesperson, Professor Welshman Ncube on Sunday said when the Alliance presidential candidate Advocate Nelson Chamisa began highlighting the need for modern transport infrastructure such as the bullet trains and spaghetti roads, Zanu PF labeled him as being crazy. However, on Friday last week, Zanu PF unveiled its manifesto which to the surprise of many was littered with the very same MDC Alliance program of action.

“Chamisa has been saying it was possible for Zimbabwe to have bullet trains and ‘spaghetti roads’ but Zanu PF said he was mad” said Professor Ncube while addressing thousands of supporters at an Alliance rally at eSiganda in Bubi district.

“But did you see their manifesto; Mnangagwa has literally copied Chamisa’s concepts. They just cannot ignore him” said Professor Ncube to thunderous applause.

“In a class room scenario, you cannot copy from a dull classmate, you target the best and that is what Mnangagwa has done” . 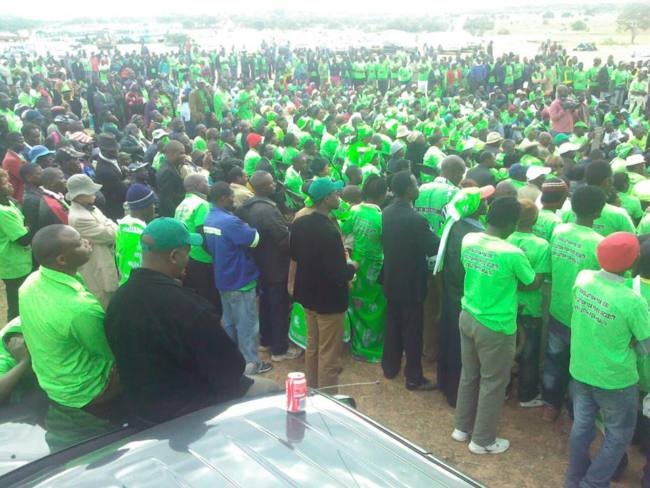 Professor Ncube chronicled Zanu PF’s fake 2013 election pledges warning people not to fall in the same trap by voting for it in the forthcoming elections.

“In 2013, they (Zanu PF) dished out tea-pots and torches and you voted for them. They promised 2.2 million jobs and who among you managed to secure a job?” he asked.

“They further promised to construct at least two clinics per district but that never happened.

“The spoke of bringing in $15 billion through indigenization programs but instead they stole $15 billion,” said Professor Ncube.

“All of their promises were not fulfilled and it is important to vote them out this year because they are not doing what they said. This is the time to boot them out,” added the MDC President.

Professor Ncube stressed that Chamisa, whom he described as an energetic and capable leader was the ‘man to win us the election”.

He said the Alliance was the only solution for Zimbabweans to get rid of the bundling Zanu PF.

News Tshuma Rueben - 9 September 2021 0
Seven more pupils at Tongwe High School in Beitbridge have tested positive for Covid-19. This brings to 12 the total number of students who have...

Video of angry police officers forcing woman to dig up grave of her boyfriend...

News Tshuma Rueben - 9 September 2021 0
A woman accused of killing her live-in lover before burning and burying his remains on a mountain was made to dig him up with...

SO SAD: 2 ZRP officers struck with an axe while trying to arrest a...

News Muza Mpofu - 9 September 2021 0
TWO police officers based in Nyamapanda escaped death by a whisker after a suspect murderer, who they wanted to arrest for killing his two-year-old...

Chaos as jealous man mercilessly bashes ex girlfriend after he saw her with new...

Couple arrested after being caught having se_x in parked car in presence of an...

News Edmore Huni - 9 September 2021 0
A COUPLE accused of having se_x in public is set to stand trial on 30 September. They were arrested on 15 June after they were...

She lived with her gogo and they never had problems, but gogo died in...

News Muza Mpofu - 9 September 2021 0
A WOMAN from Vosloorus, Ekurhuleni is bracing herself for the attack of the summer tokoloshe that terrorises her every year from around the end...

News Muza Mpofu - 9 September 2021 0
RESIDENTS of Kosovo squatter camp woke up in the early hours of Friday, 3 September to the screams of two lovers whose shack was...

Sports Sekai Moyo - 9 September 2021 0
WARRIORS coach, Zdravko Logarusic, feels his men were given a raw deal in their heartbreaking loss to Ethiopia in this 2022 World Cup Group...

SAD NEWS: Gunmen raid house at night, shoot and kill man and get away...

News Muza Mpofu - 9 September 2021 0
A Bulawayo man was shot dead at his home by four suspected armed robbers in an attack that left his neighbour with gunshot wounds. The...

News Muza Mpofu - 9 September 2021 0
COPS are investigating the deaths of three children who were found floating in a river on Tuesday, 7 September. The bodies of Nonjabulo (9) and...
Loading...