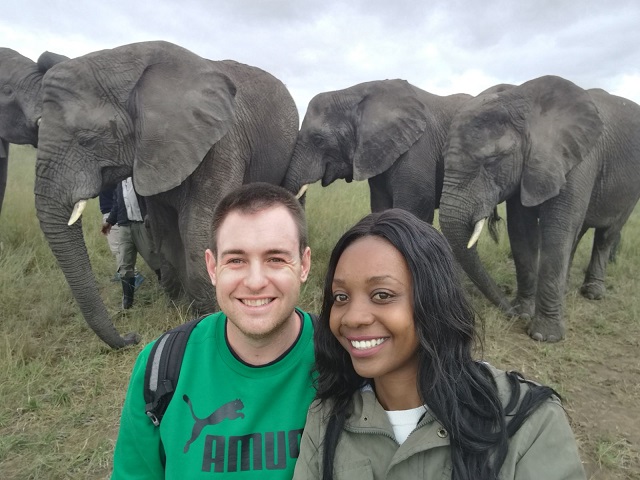 A WOMAN who lost an arm in a crocodile attack in the Zambezi River in Victoria Falls five days before her wedding has revealed how, before the horrific incident, her only worry was decorating the wedding venue and other associated preparations for their nuptials.

Speaking for the first time in an exclusive interview with the Chronicle in Bulawayo yesterday, Mrs Zanele Ndlovu-Fox and her husband Mr Jamie Fox said their love was enough to overcome the tragedy.

The beautiful story of the two, whose love got an acid test a few days before their wedding, has attracted international media attention as they are living proof that love conquers all.

Mrs Ndlovu-Fox was attacked by a crocodile while she was canoeing in the mighty Zambezi River with her then fiancé’s family.

The surprisingly cheerful Mrs Ndlovu-Fox animatedly described how her husband risked his life to literally snatch her back from the jaws of the crocodile.

“We were canoeing in the upper Zambezi using those inflated rafts. The waters were very calm, we had guides and there were about seven canoes in the water,” she said glancing lovingly at her husband who was massaging her feet that were draped on him on the balcony of the Catholic-run Mater Dei hospital.

“The crocodile just jumped out of the water and bit a chunk of my arm together with the side of the boat”.

The couple said guides had told them crocodiles were rare in that part of the river.

“The canoe started deflating and it all happened so fast. The crocodile bit me again and pulled me into the water. My husband was thrown out on the opposite side so the boat was between us,” Mrs Ndlovu-Fox said.

“Jamie swam over to where I was struggling with the crocodile that was trying to pull me to the bottom of the river. He grabbed my waist and with the other hand he rained blows on the crocodile”.

At this point, the couple gazed into each other’s eyes and burst out laughing.

“It all happened so fast. We have conflicting accounts of events,” said Mr Fox.

They said when the guides saw them battling the huge reptile, they joined in.

Mrs Ndlovu-Fox said her right arm, just above the elbow, was in tatters.

“The pain was excruciating but with my husband by my side, I summoned the strength to fight through it,” said a beaming Mrs Ndlovu-Fox, who appeared unperturbed by her condition.

She said they were rushed to safety and her husband was visibly in shock but tried to calm her down.

A helicopter airlifted them to a hospital in Victoria Falls where she was then transferred to Mater Dei Hospital in the city.

“I get depressed by people who come here and start crying you know. I know people feel pity for me at this moment but being more sorrowful does not help the situation,” said Mrs Ndlovu-Fox.

“I look forward to friends and family who are going to make me laugh and not remind me of what is going on. I actually spend my time comforting my relatives”

Her arm had to be amputated following the attack a few days before their big day.

Defying odds, the two wed in a beautiful ceremony facilitated by Mater Dei Hospital at the hospital’s chapel.

“I spent a lot of time preparing for my wedding day, running around for a venue, decor and so forth. I didn’t know that fate would have me wed in a hospital chapel, with one limb missing. But in all this, I’m not complaining, my wedding was the best, and I have a wonderful husband,” Mrs Ndlovu-Fox said.

The couple could not keep their hands off each other throughout the interview.

Asked why he had not run for the hills instead of tying the knot, Mr Fox said: “It’s a miracle; there is no other way to explain it. I thought it was some joke and someone was pranking us. It took about five seconds for me to see it was real,” said the groom.

“I love her even more and this incident actually made me feel the deep meaning in our vows. For better or worse, in sickness and in health, that’s just how our love is going to be. I never even at one point had the thought of calling off the wedding.”

“We met in 2016. I had come to Zimbabwe for some programme. I knew then that I wanted to marry her.

“I visited the country a couple of times, but I finally proposed in February 2018 at Antelope Park in Gweru. She said yes. I was at my most nervous as I so much wanted her to say yes. She agreed and I approached her family, paid bride price and we set off planning our wedding. She was responsible for wedding preps and I was sorting out her visa.”

The couple are preparing travelling documents as they will be relocating to the United Kingdom soon.

The wedding had to be conducted at the Mater Dei hospital chapel where a Methodist pastor officiated before an unexpected 60 guests.

Another wedding ceremony continued — in their absence — at Busters Sports Club in Hillside, which had initially been booked for the wedding.

A majority of the guests first heard of the attack at the ceremony.

“Our wedding was blissful. It was perfect and there were so many people in the chapel. We watched the other ceremony on videos and we saw photos. It was beautiful. I really wish we were there but I’m so happy that the wedding proceeded despite all the drama,” said Mr Fox.

The love birds could not stop smiling as they sat on the balcony of the hospital ward while admiring the beautiful scenery.

“There’s always something good about life to celebrate. Just look at how beautiful this view is. Sunshine and green, it’s beautiful,” said Mrs Ndlovu-Fox as her husband continued massaging her foot.