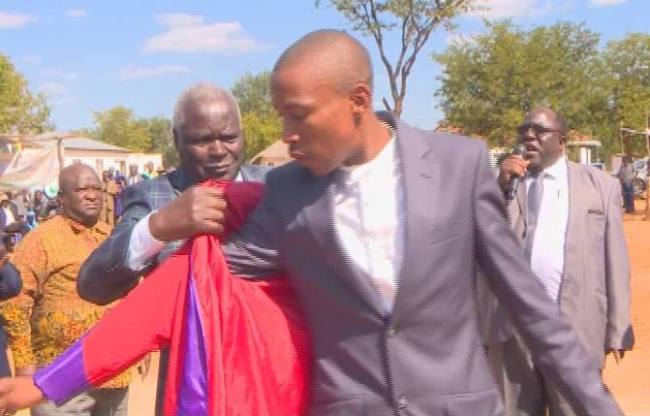 A 25 year old and Midlands State University (MSU) student, Zwelani Ndiweni has been installed Chief Nkalakatha in Binga, amid calls by the government for traditional leaders to preserve the country’s cultural values.

Ndiweni, who has just become the youngest chief in Matabeleland North Province, is a third year Bachelor of Science (Honours) Degree in Local Government Studies student.

Speaking at the installation ceremony, the Minister of Local Government, Public Works and National Housing, Cde July Moyo explained the role of the traditional leaders, saying they discharge their duties with executive, judiciary and legislative powers in line with the constitution of the country.

He said traditional leaders are custodians of the country’s values and culture hence the need to respect them.

Family spokesperson, Mrs Nellie Ncube and the Deputy President of the Chiefs Council, Chief Mtshana explained that Zwelani’s chieftainship is the 8th in the Ndiweni family tree and urged him to work well with people in his family and the entire community.

Born on the 9th of March 1993 at Marondera Clinic in Bulawayo, Chief Nkalakatha did his primary education at Lukanyiso Primary School from 1999 to 2005 and Sobukazi Secondary School from 2006 to 2010.

He did his advanced level at Hlangabeza High School in Nkayi before proceeding MSU.

Zwelani takes over the chieftainship from his late father, Gilford Ndiweni who passed away on the 20th of February in 2014.