WHEN residents caught the young man they claim is a well-known thief stealing on Monday they decided to teach him a lesson.

But instead of the usual kasi punishment of fists, sjamboks, rocks and maybe some petrol, these residents had a different plan in mind. 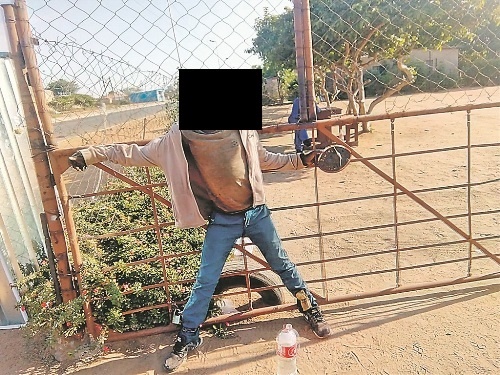 The 20-year-old man was chained to the gate of a shop and given some lashes with a sjambok. Some poured water over him. He was shamed from 9am to 8pm.

The residents of Winterveld in Tshwane said they hoped by shaming the suspect they would make him change his evil ways.

“We wanted to get the thieving demons out of this thug. He has been stealing from us and we don’t know what to do with him anymore. We chained him to a gate for everyone to see him,” said trader Richard Dube.

The residents claimed the young thug had been stealing from them for as long as they can remember.

Some said they had opened cases against him but he always came back to steal again.

“We don’t want to take the law into our hands because we can be arrested for that. Some locals passing by poured water on him.

“But we think this will teach him a lesson. We are tired of this boy,” said one resident.

“If we display him like this, people will recognise him and maybe this will make him stop.”

He said the suspect had turned his store into his playground.

The suspect told the SunTeam he was sorry and promised not to steal again.

Captain Samuel Sebola of Loate Police Station advised victims to bring their case numbers so he can investigate what happened to the dockets.