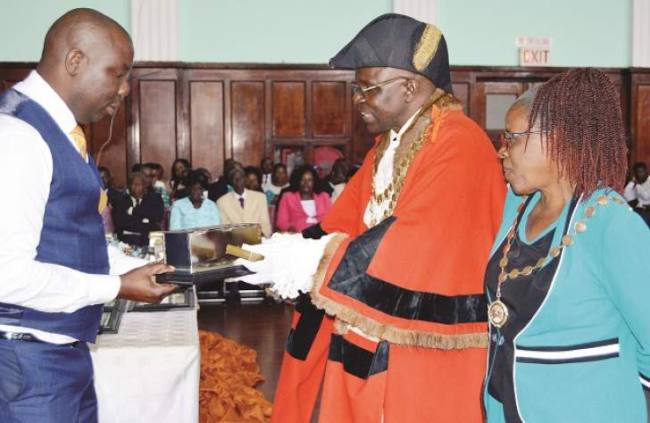 Clr Moyo's defeat comes just a few days after he had declared he was willing to serve another term although admitting that he was faced with an uphill task in that bid as party youths were calling on older members to step down and pave way for the younger generation and fresh ideas.

Mr Kambarami, who is a member of the party's youth assembly trounced Clr Moyo, receiving 170 votes to the Mayor's 25.

Confirming the outcome of the primaries, the party's provincial chairperson, Bulawayo Deputy Mayor, Clr Gift Banda said the process was ongoing with most of the wards in the city having been completed.

"The process is going on smoothly with some of the wards already having completed voting while some might go on until tomorrow (today)," said Clr Banda.

Mr Mhaka replaces Clr Banda who will be contesting to represent the party in the National Assemby seat in Njube-Lobengula constituency. However, the party had to postpone the primary elections in Cowdray Park where the sitting councillor Clr Collet Ndhlovu was being challenged by his stepson, Mr Happyson Ncube, after Clr Ndhlovu and his supporters violently disrupted the vote counting process when he reportedly realised that the results were not going in his favour. Party sources revealed that Clr Ndhlovu became violent, attacking Mr Ncube's supporters vowing that the election will not go ahead.

In ward 16 where Clr Nephat Sibanda lost to Ms Mildred Ncube there were also reports of violence breaking out with Clr Sibanda allegedly being attacked by Ms Ncube's son who was attempting to block him from observing the counting process.

More than 20 of Clr Sibanda's supporters came to the Sunday News newsroom last night where they accused Ms Ncube of rigging and bussing people to come and vote for her. Contacted for comment, Clr Sibanda confirmed that he was assaulted saying he had already reported the matter to the police.

News Cynthia Goba - 14 August 2020 0
GOVERNMENT yesterday disbursed the second monthly nostro payments for civil servants and pensioners while observing that some banks in connivance with some players in...

News Muza Mpofu - 14 August 2020 0
ALTHOUGH Christianity has had a positive impact on the socio-cultural arena throughout the world, the growth of prophecy-led ministries has witnessed increasing claims of...

Chaos as woman demands back gifts & money she gave boyfriend after he refused...

News Muza Mpofu - 14 August 2020 0
MOST relationships are uplifted by regular se_xual intercourse and for most men, se_x is a good thing and physiologically beneficial. It calms them, keeps...

Drama as policeman runs for dear life after sand poachers bashed him while vowing...

News Sekai Moyo - 14 August 2020 0
A POLICE officer ran for dear life to a police station after sand poachers attacked him with fists accusing him of always chasing them...

Disaster as married man axes neighbour to death in fight over married woman with...

News Muza Mpofu - 14 August 2020 0
EUNICE, widow to the late Cephas “Motomuzhinji” Mashakada, is unwell. Mai Mashakada, as the widow is fondly known in music circles and beyond, is down...