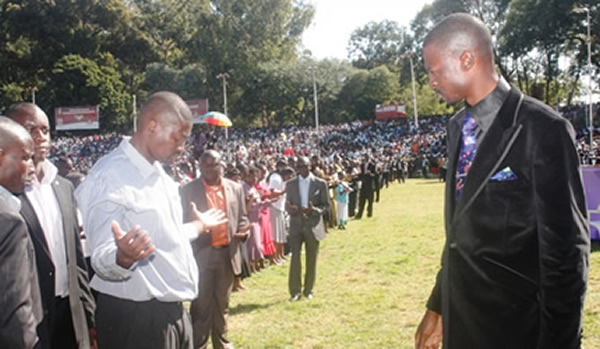 UNITED Family International Church (UFIC) leader Emmanuel Makandiwa has challenged his accusers, Blessing and Upenyu Mashangwa to stop maligning him and prove their “lies before the courts”.

In his response to a case in which he is being sued for $6,5 million by the Mashangwas for allegedly causing them loss of business over false prophecies, Makandiwa said there was overwhelming evidence that the couple had were not interested in substantiating their lies, but raise baseless allegations, including labelling him an occult worshipper.

Makandiwa is objecting to a fresh High Court bid by the Harare couple claiming $6,5 million from the clergy.

The couple claim they lost a house to a local building society after they were misled by Makandiwa’s prophecy that their debt to the financial institution would be cancelled miraculously.

The UFIC leader claimed that evidence before the court proved that the Mashangwas fraudulently sold their house twice, culminating in one of the victims, Jemina Gumbo, taking the couple to court.

The raging court case has also revealed that the Mashangwas have been in and out of the courts, with the Judicial Service Commission’s case-tracking and monitoring system revealing they have 28 cases before the courts.

“The applicant’s answer is more name calling and a failure to address the question of whether this claim is a serious claim in respect of which relief is seriously sought as opposed to pure annoyance.” Makandiwa said through his lawyer Advocate Lewis Uriri.

“In this matter, I have in my founding affidavit, made specific allegations that the respondents lied in their pleadings in respect of the facts establishing each of their causes of action.

“I have, in my founding affidavit, attached documents and verified my contention that every fact that the respondents allege in their summons and declaration is false.

“The respondents have shield away from answering these specific allegations head on. Did they or did they not plead false facts as founding their cause of action?

“This is the gravamen of the matter. This is what they must respond to. Their failure to do so is an admission of what I have contended. I indeed on the face of the founding affidavit, the application is incontrovertible.”

Makandiwa said he made a principal application on the grounds that the action is not only both frivolously and vexatious, but also a self-evident gross contemptuous abuse of the process of this court.

“We contend on the following bases, that the plaintiffs have deliberately pleaded and founded their purported causes of action on deliberate and easily demonstrable falsehoods,” Makandiwa argued.

“Each of the six claims suffer from predictable failure and so groundless that no reasonable person could ever hope to obtain relief therefrom.

“Allegations of us being fraudsters or people that dabble in the occult or consult n’angas, false and malafide, made for the public gallery, do not take to simple question of whether they told the truth or not in their declaration,” the UFIC founder said.

News Edmore Huni - 6 August 2021 0
Two people were burnt beyond recognition while three others were seriously injured in a head-on collision after a Toyota Hilux driver failed to negotiate...

SHOCKING: Hubby of girl (14) who died at Marange shrine wants to marry late...

News Tshuma Rueben - 6 August 2021 0
SOME relatives of the late 14-year-old girl who died while giving birth at a shrine have been appealing for justice following reports that the...

Shock as madala dumps huge python at dumpsite in Harare

News Cynthia Goba - 6 August 2021 0
Ushewekunze residents yesterday woke up to find a python stashed in a white sack near a dumpsite. Although it could not be established how the...

News Muza Mpofu - 6 August 2021 0
A case where a Shurugwi man allegedly rap_ed and impreg_nated his 15-year-old daughter has complicated life for the complainant and her new baby. An investigation...

Dealing with shame after nudes leak…Why men ask women for nude pictures — The...

News Muza Mpofu - 6 August 2021 0
DEALING with the embarrassment that comes with leaked nud_es is undoubtedly one of the most traumatic experiences that one can go through and it...

News Muza Mpofu - 6 August 2021 0
Harare residents should brace for a dry weekend as the local authority will be cutting off water supplies today in order to carry out...

News Sekai Moyo - 6 August 2021 0
Two prison inmates who have been serving their sentences at Khami Maximum Prison have been dragged to court after they anally rap_ed a fellow...

You’re not the biological father of ‘your’ 3rd child: Woman reveals sister’s secret to...

News Muza Mpofu - 6 August 2021 0
IT is apparently akin to bereavement, for any man to discover that you are not the biological father of the child you were raising...
Loading...