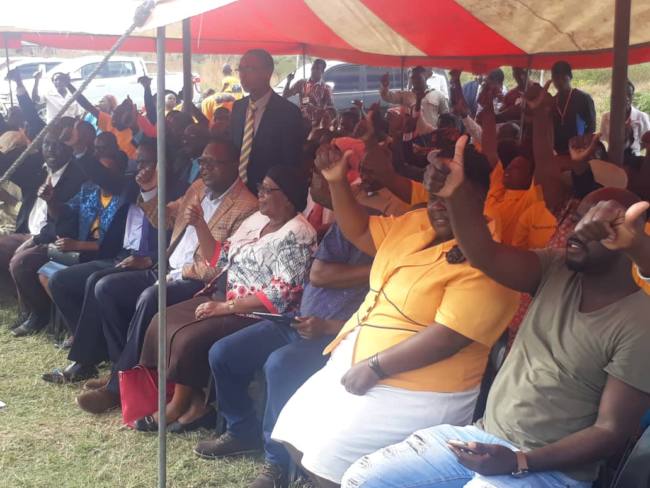 Matambanadzo was barred from contesting the ruling party’s primary elections after being accused of links to the NPF which is reportedly backed by former president Robert Mugabe’s family.

NewZimbabwe learnt Monday afternoon that the legislator has officially switched to NPF.

He will also be the NPF candidate for Kwekwe Central constituency.

NPF spokesperson Jealousy Mawarire confirmed Masango has joined the party and said they are many cases of people dumping the ruling party join the opposition outfit.

“There are close to 100 cases that we have of such people coming and I can tell you that many will soon come out in open,” said Mawarire.

“We will not force them to come out in open at once and that’s a strategic decision.”

Matambanadzo, a self-confessed grade two dropout, ex-garden boy and former street photographer, had been the legislator for the constituency since 2013.

He said he has since written to the Zanu PF national leadership about his decision to quit the party.

“Under Zanu PF I have made sure that I don’t disappoint my president Robert Mugabe and I have fulfilled that mission by empowering our people in the area,” Matambanadzo told NewZimbabwe.com.

“I would rather be with a party that empowers people than taking power from the people and promise them nothing.

“Look, they are busy inviting foreigners to do business, what about our local people.”

“And just take a look at what they have done to me after all that I have done for the party and the people in my constituency.”

Sports Cynthia Goba - 1 December 2020 0
Black Rhinos legend Gift “Guava” Kamuriwo has died. He was 47. Kamuriwo, who also played for the Warriors in the early 2000s passed on at a...

News Tshuma Rueben - 1 December 2020 0
marry Mubaiwa was yesterday brought to court in an ambulance, carried into the building on a stretcher and then pushed into the courtroom in...
Loading...