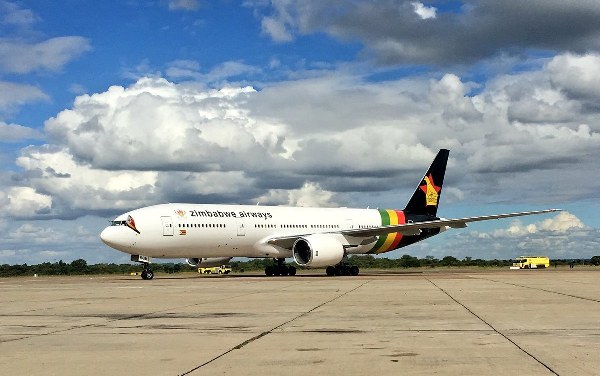 Zimbabwe’s new airline, Zimbabwe Airways — which has been linked to the family of ousted former president Robert Mugabe — has hit fresh controversy.

This comes as the Daily News has been told that one of the airline’s “new” planes that it recently sourced from Malaysia — a Boeing 777 jetliner — has already been sent back to the Asian country for repairs before it has made a single commercial flight.

This also comes as the government is yet to receive the remaining three wide-bodied aircraft from Malaysia Airlines, which are to be used by the new airline whose ownership has prompted more questions than answers — although the government, which initially distanced itself from the secretive carrier, now says it owns it.

Well-placed sources said yesterday that the “new” Boeing 777 jetliner had recently flown back to Malaysia for A checks and other maintenance works.

A subsequent visit by a Daily News crew to Robert Mugabe International Airport confirmed that the plane was indeed no longer parked at the airport.

According to experts, A-Check maintenance refers to checks that are carried out on an aeroplane every eight to 10 weeks — where “filters will be changed, key systems (like hydraulics in the ‘control surfaces’ that steer the aircraft) will be lubricated and a detailed inspection of all the emergency equipment (like inflatable slides) is completed”.

Transport minister Joram Gumbo, who has been tormented by the Zim Airways deal, could neither deny nor confirm yesterday that the Boeing 777 had been flown back to Malaysia.

“Ask whoever told you that the plane went for repairs to tell you the extent of the damage. As far as I am concerned, I do not know anything about it,” Gumbo said curtly.

The sources who spoke to the Daily News said as long as the plane was not flying, it would continue to gobble hundreds of thousands of dollars both in parking fees and maintenance costs.

They also revealed that the plane had raked up a bill of more than $100 000 in parking, maintenance fees and crew hire alone in the short time that it had been parked at the airport.

The delay in flying the “new” plane commercially has apparently been partly caused by the fact that Zim Airways has no qualified captains to fly it, and will thus have to fork out even more money to hire expatriate pilots.

“Unfortunately, if the delay in organising everything continues, the costs of maintaining it will keep ballooning, especially considering the fact that it is not making any money — which all raises more questions as to how we have ended up where we are,” other aviation sources have said.

“Firstly, no one wanted those old planes and so they should have cost us much, much less. Secondly, Zim Airways clearly has no capacity to operate those aircraft, as they have no trained pilots and engineers for them.

“This means that we will need to hire expatriates to fly the planes, and the going rate for a B777 captain is at least $20 000 per month which is unaffordable in this market, where you don’t even have the passengers to justify the investment.

“You require at least three sets of pilots per aircraft, although you can even go up to five if you have 15-hour flights and above,” one of the aviation experts told the Daily News on the day the government received the 777 jetliner which was flown by a set of five Malaysian pilots when it landed in Harare.

The plane touched down at the Robert Mugabe International Airport on April 11, this year, at a glittering ceremony that was attended by many government officials.

It was brought as part one of the opaque deal that will see a total of four wide-bodied planes eventually being sourced from Air Malaysia for Zim Airways.

Government is also set to bring in two Embraer jets — raising more concerns about the Air Malaysian deal and the government’s seeming lack of preparedness for the planes.