Harare West MP Jessie Majome who withdrew from MDC-T’s primary elections citing irregularities has insisted that she is still an independent candidate. Majome denied claims made by MDC-T National chairperson Morgen Komichi that the party had reached out to her and placed her on the senatorial list to prevent her from leaving the party.

What Sen. Komichi said yesterday is as much news to me as it is to you. I decided to run as an independent candidate for the Harare West National Assembly seat because of on 1 hand the gross irregularities of the party’s primary elections & my desire to represent my community. 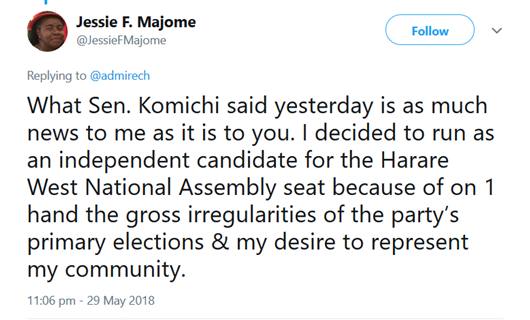 Party chairperson Morgen Komichi had said that Majome would either join Senate or automatically join the House of Assembly on the party’s women quota system.

“Most of the things she (Majome) raised, we have addressed them. She raised those issues prematurely, but we have been discussing. What is left is for us to agree on the way forward. If she is not prepared to go through the primary elections due to sticking issues, we would offer her the proportional representation slot or the Senate,” he said.