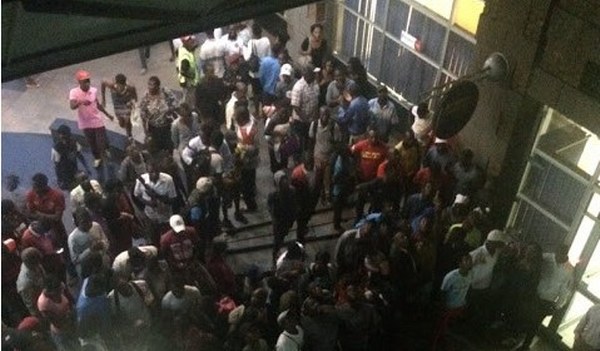 Singer Nicholas Chase Skuza popularly known as Chase Skuza had to groan for freedom as his dancer allegedly grabbed his pen!s and twisted it in a fight over unpaid salaries.

The incident happened last Friday at Diepsloot in South Africa where they had a number of shows, at least according to her dancer Revonia Ndaba.

Revonia who has been a dancer and backing singer for Chase Skuza since 2011 up to mid-May this year revealed what triggered the fight.

“When we went to South Africa he (Chase) promised to pay $30 but he failed to pay me after spending a month with him doing shows.

When I asked when he would pay me, he failed to give me a straight answer and he did that for several days,” said Revonia.

She said what incensed her most was that she shared a room with six band members and at times would share a bed with male band members.

“What fuelled my anger was that we would sleep in one room and at times I would share a bed with some male band members,” she said.

But things took a nasty turn last Friday when Revonia demanded her money from Chase but the seemingly defiant Chase took the matter lightly. As a result an argument ensued between Chase and Revonia and Chase allegedly slapped Revonia. In the heat of the moment Revonia grabbed Chase’s privates and twisted them.

She said after that Chase gave her $15 instead of the agreed $30.

Efforts to get a comment from Chase were fruitless as he did not answer his phone or respond to the messages which this reporter sent to him.

However, Chase’s manager Jeremiah Ndlovu said: “Chase Skuza is currently in South Africa. I did not witness the incident that happened in South Africa as I had remained here in Zimbabwe because I’m employed somewhere. The incident that I can confirm is the one that occurred in early March at Plumtree Business Centre where the two shouted obscenities at each other after the businessperson who was supposed to pay us had delayed in paying us our monies for performance.”

In 2017 a businesswoman in Bulawayo confiscated Chase’s guitar after he took 10 jackets on credit for his band members and failed to pay.