The controversial businessman Wicknell Chivayo has said that if MDC President Nelson Chamisa conceded defeat to Emmerson Mnangagwa before the forthcoming elections, he will be appointed Minister of state “in charge of social media”

Chivayo was speaking in front of a crowd at ZANU-PF youth interface rally on Thursday in Gweru.

He took a picture of ZANU PF supporters at a rally and captioned on Twitter saying, “ED aenda nechimuti seku seka…If Chamisa is gentleman enough to accept defeat NOW our revolutionary PARTY can consider recommending SHUMBA to appoint him and him ALONE as a minister of state in charge of social media vana whatsapp, twitter and facebook etc,” Chivaro said via Twitter 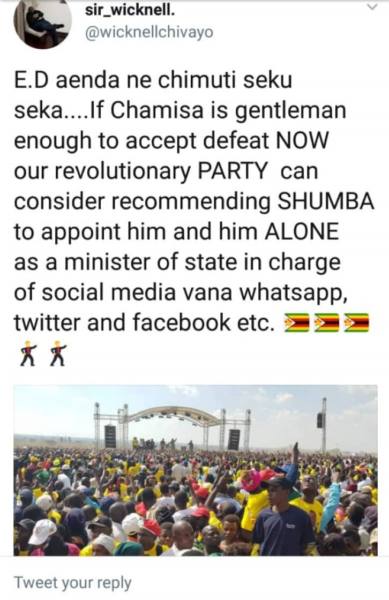