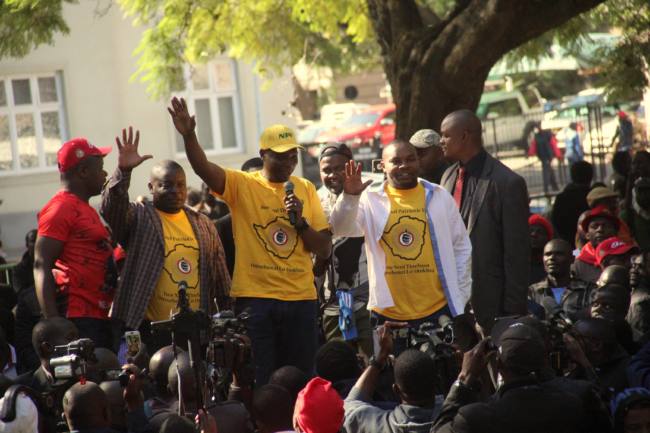 The opposition National Patriotic Front (NPF) largely made up of expelled Zanu PF members has for the first time come out in the open in support of the MDC-Alliance Presidential candidate, Nelson Chamisa whom they said has the capacity to upset on the incumbent, President Emmerson Mnangagwa in the forthcoming elections.

The NPF, backed by former President Robert Mugabe has in the past few days, been linked with a possible move to join forces with the MDC Alliance in a bid to mount a strong challenge against President Emmerson Mnangagwa and Zanu PF in the forthcoming polls.

Addressing MDC-Alliance supporters after the handing over an electoral reforms petition to ZEC, NPF Spokesperson Jealous Mawarire gave his blessings to Chamisa saying they are convinced of his chances to topple Mnangagwa in the July 30 polls.

“As the NPF, we are the one who started with the gospel that young people should take up leadership positions and today we are strongly behind President Chamisa. We are saying Chamisa should be in office come July 30.

“Do not be misled, we want the bullet trains (that Chamisa has been talking about), we want better hospitals, we will get more jobs when Chamisa gets into power. We will get better universities under the leadership of Chamisa, we will get better housing under Chamisa so it is our collective effort to make sure that we vote Nelson Chamisa on election day,” said Mawarire who was flanked by four other NPF members including Shadreck Mashayamombe and Chipangano leader Jim Kunaka.

Meanwhile, the MDC Alliance, led by Chamisa submitted a petition to the Zimbabwe Electoral Commission (ZEC ) calling for electoral reforms before the elections.

Below are the demands by the MDC Alliance:

i) All parties, and candidates (and or their representatives) participating in the election, forthwith be furnished with an electronic copy of the provisional voters’ roll as is required by section 21 of the Electoral Act Chapter 2:13.

iii) That an independent, external audit of the voters’ roll be commenced immediately after the inspection period mentioned above, with the auditors to be agreed by all stakeholders and shareholders.

iv) That there be full and proper agreement by all stakeholders on the procurement, security, quality and movement of all ballot material, in particular, the ballot paper.

v) That the ZEC immediately retires in its secretariat, any security personnel whether currently employed or formerly employed by the security services as defined in Chapter 11 of the Constitution.

viii) That there be full disclosure with regards to the custody and location of the BVR Servers and that all stakeholders be allowed access to validate the legitimacy of the data in those servers.

x) That all military personal currently deployed in the rural areas be and are hereby recalled and that there should be full and complete de-militarisation of the rural areas.

xi) That all international observers and monitors should now be allowed immediate access to Zimbabwe to monitor the election pursuant to the proclamation of the election on the 30th of May 2018.

xii) That forthwith, there must be equal access to and equal coverage of all political parties in the public media, in particular the Zimbabwe Broadcasting Corporation.

xiii) That there be a provision in terms section 67 of the Constitution to allow the Diaspora to vote even if it means voting only in the presidential election.

xiv) That there be a cessation of the use of food and inputs as political weapons in this election.