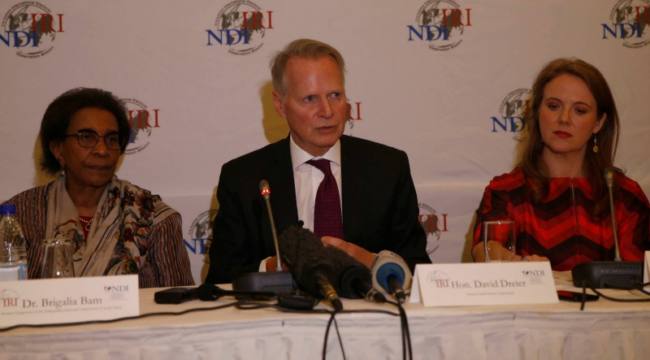 THE government has not implemented enough reforms to ensure a free and fair election despite notable improvements in the political environment and electoral preparations as compared to the past.

A joint International Republic Institute and National Democratic Institute Assessment Mission said Zimbabwe needed concerted efforts to restore public faith and confidence in the country’s institutions and set it on a new trajectory.

“However, a number of significant opportunities to break away with the past and restore confidence in advance of the polls have been missed thus far. As a result, concerns remain about the fairness of the process,” noted David Drier, who chaired the mission.

The former United States Congressman said there was need for extraordinary steps to achieve perceptions of fairness, which he said were critical in Zimbabwe’s elections, scheduled for July 30, given the fact that the current government had assumed power through a military intervention.

He however, noted that there was still ample opportunity to implement reforms to enhance inclusiveness, transparency and accountability of the electoral process.

The country’s opposition political parties have been complaining about the government’s indifference on the speedy implementation of electoral reforms ahead of the elections.

A coalition of seven political parties, under the banner of the MDC Alliance this week marched in the streets of Harare and petitioned the country’s electoral body and President Mnangagwa to implement electoral reforms before the polls, warning they would make it difficult for the elections to continue should their demands not be met.

The MDC Alliance was joined in the protest by other political parties who were not part of the coalition, who pledged their support for the alliance candidate Nelson Chamisa, thus exerting more pressure on the regime.

The opposition presented 10 demands which they said could be easily implemented as they were administrative issues which did not require changing the country’s laws.

The IRI-INDI Pre-Election mission noted that some of the issues raised by the opposition political parties which needed to be addressed included strengthening the independence of ZEC, transparency in the printing of the ballot papers and auditing of the biometric voters roll among others.

The joint mission was deployed into the country from the 2nd of June to the 8th of June as part of the long term observation effort with a specific mandate to provide an independent assessment of the electoral preparations and offer practical recommendations;