John Mahlabera(36) a Chiredzi prison officer who made headlines after he was fired for undermining ED Mnangagwa by saying “Nelson Chamisa is my President” made another bold statement by appearing at Tshovani Stadium in Chiredzi where he stood side by side with his icon at the MDC Alliance rally today.

Mahlabera who is facing trial on the 12th of June is at odds with authorities after he posted an online message declaring that his president is Nelson Chamisa of MDC-T, not Emmerson Mnangagwa of Zanu-PF. 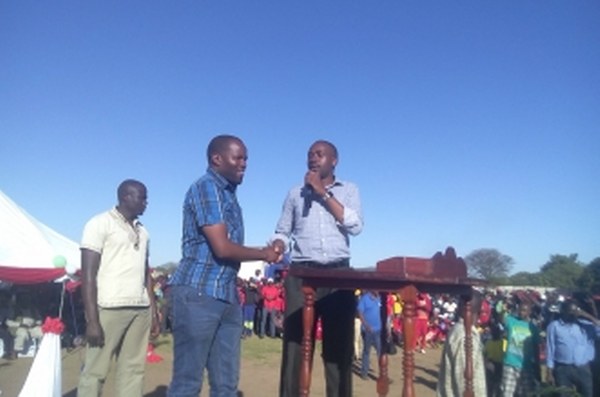 The Zimbabwe Prisons and Correctional Services(ZPCS) is charging him for undermining the authority of president Mnangagwa.

According to ZPCS, Mahlabera allegedly posted a message on micro blogging site Twitter, which reads; “Come to Chiredzi my president”.

The ZPCS said Mahlabera posted this message after an MDC-T party rally that was held at Jerera Growth Point in Zaka in Masvingo province, which was addressed by opposition party leader Nelson Chamisa.

ZPCS said by posting such a message on Twitter, Mahlabera showed loyalty to Chamisa and disloyalty to President Mnangagwa.

News Muza Mpofu - 26 November 2021 0
A married woman from Tsholotsho’s area of Mapengula was on 21 November busted by her husband having se_x with another man after the husband...

Update on 2 Javas pre-school kids who suffocated to death in car boot, more...

News Muza Mpofu - 25 November 2021 0
The two crèche kids who died in Chiredzi yesterday were left to bake in the sun in the boot of a Honda CRV for...

JUST IN: More bad news for foreigners living and working in South Africa

News Tanya Mugabe - 25 November 2021 0
South African Home Affairs Minister Aaron Motsoaledi has told Parliament that his department is hammering out a bill to set ‘quotas’ for the number...

Chaos as angry sekuru (77) pours petrol on government building and sets it on...

Man moves to evict his own brother from his house: He has attained legal...

News Muza Mpofu - 25 November 2021 0
A Chitungwiza man is evicting his own brother from his house claiming he has attained legal age of majority. Ephraim Paradzai has summoned his brother...

News Sekai Moyo - 25 November 2021 0
A City of Harare employee was yesterday dragged to court after he reportedly terminated a 14-year-old girl’s preg_nancy illegally. Justice Chinyadza, 45, was not asked...

News Muza Mpofu - 25 November 2021 0
A 30-year-old Gweru man lost his motor vehicle to thieves in the early hours of Tuesday morning at his home in Ascot. According to the...
Loading...