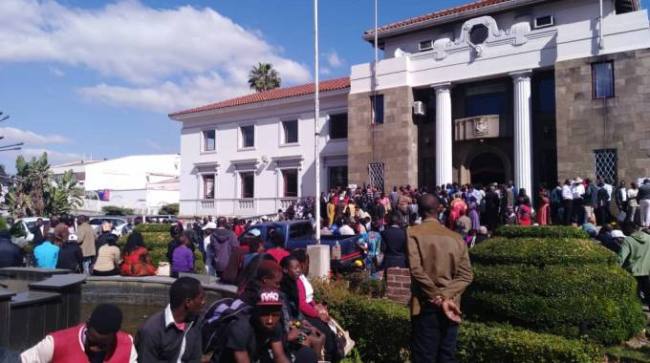 Parliamentary, senatorial candidates and Provincial Council candidates from different political parties thronged Mutare Magistrates’ Court premises for the Elections Nomination Court ahead of the harmonised plebiscite set for July 30. Apart from Cde Pemhenayi (Mutare North), Cde Kadzima (Nyanga South) and Mr Chipanga, who is vying for the Dangamvura-Chikanga constituency, Engineer Patrick Chitaka also filled his papers as an independent candidate for Mutare Central constituency after he defected from Alliance for People Agenda (APA).

The submission of papers at the Nomination Court by candidates was expected to be closed by 4pm yesterday ahead of a verification process that would be done before announcement of the final list of candidates by the election management body — the Zimbabwe Electoral Commission. Cde Pemhenayi’s decision to contest an independent candidate sets the tone for a gruelling battle for Mutare North constituency parliamentary seat against Zanu-PF candidate and party provincial chairman Cde Mike Madiro while the same is expected in Nyanga South constituency where Cde Kadzima will square off against sitting legislator and party candidate Cde Supa Mandiwanzira.

In an interview on the sidelines of the Nomination Court processes, Cde Pemhenayi said he decided to file as an independent candidate after failing to be afforded a free and fair party primary election.

“I think I should make it clear that Zanu-PF is part of my DNA therefore as I campaign to represent the party in parliament I will also be campaigning for President Emmerson Mnangagwa,” said Cde Pemhenayi.

The Zanu-PF primary election for Mutare North was marred by controversy after party members at some of the polling stations refused to vote in protest against irregularities in the process.

However, in a separate interview Zanu-PF Secretary for Administration (Manicaland) Cde Kenneth Saruchera said any Zanu-PF member who decides to contest in the election as an independent candidate is automatically expelled from the party.

“As a party we are happy with the process here at the Nomination Court and we are generally satisfied as it meets our expectations. Everything is under control and transparent.

“We went through a primary election and we are happy that our people elected people whom they think can represent them well. For those that were disgruntled by the outcome of the primary elections there were avenues within the party to have their concerns heard. That was done including audience with the highest office in some cases. This is the reason we had some re-runs

“However, for those that will eventually decide to contest in the election as independent candidates they are automatically expelled from the party,” said Cde Saruchera.

Mr Chipanga said he has decided to contest in the election with the aim of taking his words into action for the purposes of community development.

“I have decided to contest in the election with the aim of taking my words into action for the purposes of community development.

“I have been saying a lot through my music and I think it is high time I get a chance to put my words into action in order to develop my area,” he said.

Mr Chitaka said he defected from APA after realising that there is a lot of confusion within the party.

“I think I am better off going ahead as an independent candidate without being labelled in line with a certain party.

“There is a lot of confusion within APA that I thought I should disassociate myself with,” he said.