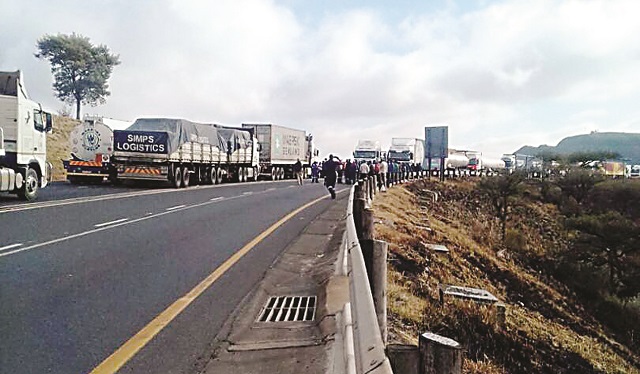 ABOUT 63 South African haulage truck drivers have been arrested after staging a ‘xenophobic’ protest targeting foreign drivers, including Zimbabweans in Harrismith along the Johannesburg-Durban (N3) Highway.

South African drivers alleged that foreigners, particularly Zimbabweans were taking away their jobs, and were the main cause for low salaries they are receiving.

The protesters were demanding that all foreign drivers dump their trucks at the pass and leave their country with immediate effect.

Armed police teams were engaged to disperse the protesters and some arrests were made.

The protest started early in the morning on Wednesday. Local haulage truck drivers blocked the road from both directions and traffic only started clearing after 9PM after police intervened.

Zimbabwe’s Consul-General to South Africa, Mr Batiraishe Mukonoweshuro said about 63 protestors were arrested and were set to appear in court soon.

“I can confirm there was a massive protest yesterday (Wednesday), by haulage truck drivers as South Africans claimed that foreign drivers were taking away their jobs. The protest was also done for a number of other reasons which include little salaries, hard working conditions for them, with foreign drivers being pointed as the sole problem causers.

“About 63 people were arrested and will appear in court. The protestors took advantage and decided to make their statement in a mountainous area — Van Reneen Pass in Harrismith between Johannesburg and Durban,” he said.

Mr Mukonoweshuro said police had managed to clear the road and were closely monitoring the situation.

A Zimbabwean truck driver who preferred anonymity said he was caught up in the protest from 11AM up to 9PM. “I arrived at the scene at around 11AM and only managed to proceed after 9PM after police descended on the protesters. In about five hours there was a traffic jam of about 10 KM, having blocked vehicles from both Johannesburg and Durban,” said the driver.

He said the protestors went on to dismantle some parts from trucks driven by foreigners so that they would not attempt to drive away.

“Frankly every foreign driver was shaken because we are all aware how far these South Africans can go. We actually feared getting burnt inside our trucks and had to quickly oblige, step out and sit on the road all day. We are now living in fear that another xenophobic attack is coming,” said the driver.

Efforts to get a comment from South African police were fruitless.

In May 2008, a series of attacks left 62 people dead. In 2015, nationwide xenophobic attacks in which some people died also hit South Africa.