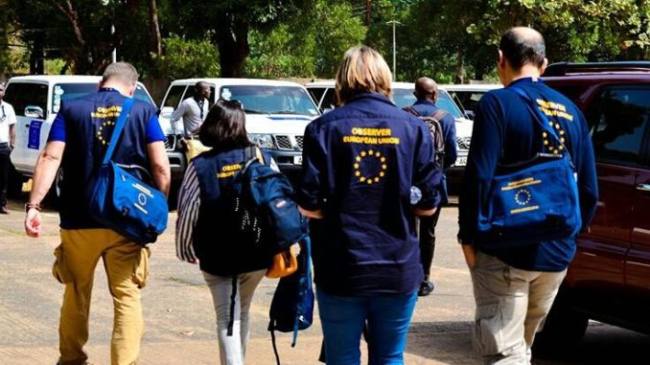 Manyika is one of the 23 candidates vying for the top job in the country.

Political parties this past week signed a peace pledge in Harare committing presidential candidates and their parties to campaign peacefully, and also encouraging tolerance between rival contestants.

“I am in Gweru where the banner for a meeting for which we have police clearance has been torn and our posters pulled down,” Manyika told NewZimbabwe.

He also complained that Zanu PF supporters defaced his posters in Chegutu.

“Our posters all over Chegutu were torn or pasted over with ED (President Mnangagwa) posters.

“We don’t know who might have shredded our (Gweru) posters but, as far as the ones in Chegutu are concerned, we know its Zanu PF because they pasted ED’s posters over our own.”

Manyika said it was disturbing that such malpractices come at a time when political parties have pledged to conduct a peaceful poll.

“Only a few days ago we signed the peace pledge in good faith. So, what are we supposed to do in light of this kind of provocation? Is Zimbabwe open for peace?” he queried.

“(Last Thursday) along Willowvale Road in Harare, council ladies wearing orange uniforms were seen removing our posters. The only posters left were ED’s,” he said.

He said he has raised the issue with European Union observers who are already in the country.

“We appreciate the EU team meeting with our team in Gweru to see for themselves what happened to our posters,” he said.

“We have also reported to the police in Gweru and Chegutu. We are informing all observer missions for them to know what is going on.”

News Cynthia Goba - 19 September 2020 0
A 19-year-old Harare model was rape_d on Thursday after she was lured to a private location by a man she had befriended on Facebook. According...
Loading...