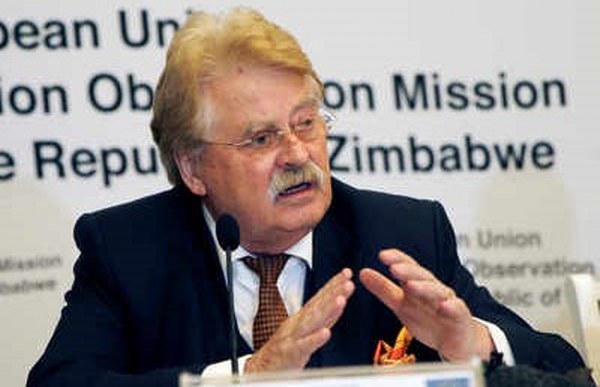 The European Union (EU) has called for transparency in the printing of ballot papers.

The EU Election Observation Mission (EUEOM), which is in the country to observe the July 30 polls, said openness in the handling and printing of ballot papers was critical if Zimbabwe is to have credible elections.

The mission’s chief observer, Elmar Brok, told a news conference in Harare yesterday that the Zimbabwe Electoral Commission must make known the number of ballot papers printed and share information on the design of the ballots.

“These elections are a critical test of Zimbabwe’s reform process. Given the context of past elections, great efforts need to be made to ensure public and political confidence in the 2018 polls,” said Brok.

“Necessary efforts include transparency and inclusivity, confidence in the integrity of the voters’ roll, emphasis on secrecy of the vote and the peaceful conduct of the polls.”

The EU team will observe the entire electoral process, including the environment for the polls and how the parties will conduct their campaigns.

Brok said their presence demonstrates the EU’s commitment to the conduct of peaceful, inclusive, transparent and credible elections in Zimbabwe.

According to Bok, it is the EU’s wish to assist Zimbabwe in its transition to satisfy the legitimate expectations of its populace and stands ready to engage further if the appropriate conditions are met.

“Elections are, in this regard, an essential step in a long and challenging reform process,” he said.

“We hope the presence of EU observers can be a source of support for the conduct of credible elections. Our observation focuses not only on the election day, but on the entire electoral process, including the environment for the polls, conduct of the campaign, results transmission and the resolution of any election-related legal disputes after voting has finished. In making our assessment, we will consider the environment and context for the polls alongside election day itself.”

This wrecked its agro-based economy, weighed down by massive unemployment and widespread poverty.

While the new government of President Emmerson Mnangagwa has promised to deliver free and fair polls, its rivals are not convinced.

The opposition parties mainly the MDC Alliance want all stakeholders in the electoral processes to be up to speed with the procurement of voting material to avoid situations where the ballot could be tampered with.

Mark Stevens, the EUEOM’s deputy chief observer, called for inclusivity and transparency to foster confidence and credibility in the electoral process.

“Issues like transparent printing and storage of the ballot papers come out in most elections. Some countries provide but some don’t. We are aware of opposition parties’ concerns and what is import is transparency and inclusivity in printing of ballot papers,” he said.