PRESIDENT Emmerson Mnangagwa’s government has awarded a whopping 22,5% “special allowance” rise to members of the security service, raising fears that the gesture could be a vote-buying gimmick as it came a few weeks before the July 30 general elections.

The allowance, according to government circulars shown to NewsDay yesterday, took effect on July 1.

Opposition parties claimed the allowance was meant to pay back soldiers for facilitating Mnangagwa’s rise to power last November.

According to a letter signed by Defence and Police Services Commissions secretary Pretty Sunguro, the military would get 22,5% rise while police would get a 20% increase.

Part of the letter dated and addressed to Defence and War Veterans Affairs secretary Melusi Matshiya read: “Following consultations between the office of the chairman of the Defence Forces Services Commission, honourable minister and secretary for Defence and War Veterans Affairs please find attached a key scale with 20% special allowance applied to members of the Zimbabwe Republic Police. Accordingly, proceed and effect adjustment with effect from July 1, 2018, as indicated on the key scales.”

The letter was copied to defence forces command element.

Government has also offered similar, but lower allowances as the grades go down.

The schedule for police was not immediately available, but an offer of 20% special allowance has been approved by Treasury, according to Sunguro’s letter to Home Affairs minister Obert Mpofu Home Affairs and Cultural Heritage secretary.

Finance minister Patrick Chinamasa could not be reached for comment as he was dropping calls. His deputy Terrence Mukupe also refused to comment, curtly saying:“I will refer that to Chinamasa. Talk to him.”

“Thank you for getting in touch with us. We request you clear your query with the Defence Forces Service Commission secretary, who is the originator of the communication,”he said.

Police spokesperson Senior Assistant Commissioner Charity Charamba could also not be drawn into commenting on the issue.

Efforts to get a comment from Sunguro were fruitless as she was said to be out of office.

Early this year, government rejected demands from nurses for a salary adjustment and at some point fired over 15 000 striking health personnel.

However, there was a noticeable adjustment to the allowances to medical doctors after another bruising fight. 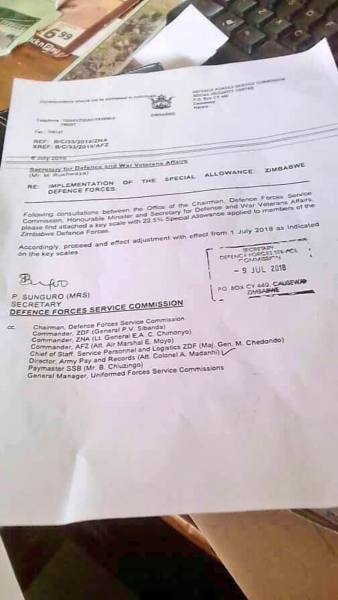 Ask Auntie Sekai Moyo - 18 September 2020 0
Dear Aunty Lisa I am married to my husband for twelve years. Two months ago, I discovered my husband's secret marriage which was done three...
Loading...