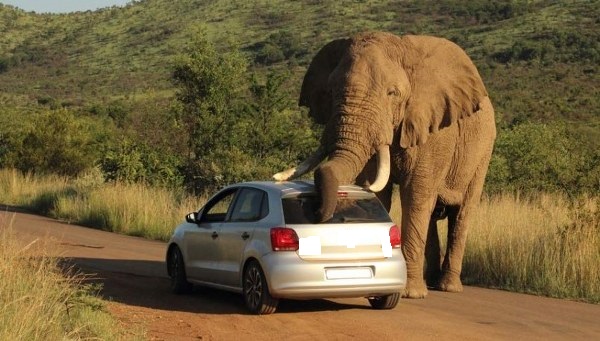 Nyami Nyami FM acting station manager, Davies Mugadza, on Tuesday evening had a close shave with death when he was attacked by an elephant whilst driving in Kariba.

It was around 6pm when Mugadza was driving to Nyamhunga residential area to collect a member of staff that was attending duty when an elephant charged at him.

This happened near the 64km peg along Lake Kariba road.

"I was slowing down to make a turn to Nyamhunga when an elephant charged at me.

"The elephant hit the roof of the car with its trunk smashing the front screen of the vehicle and then for a while stopped.

"I thought it was going to fall on roof of the vehicle or start stamping the car.

"A little later it put the task through the broke wind screen missing me by millimeters, it then looked at me for three seconds or so and then it moved back and headed for the bush.

"On lookers told me to vacate the scene as the elephants were more likely to return.

"I then drove to police station to make a report," said Mugadza.

"Vegetation is scarce at this time here in Kariba so elephants go out of the bush into residential areas to look for food.

"I urge people that drive into Kariba to always exercise extreme caution."

Mugadza said he wasn't badly injured and is still traumatised by the incident.