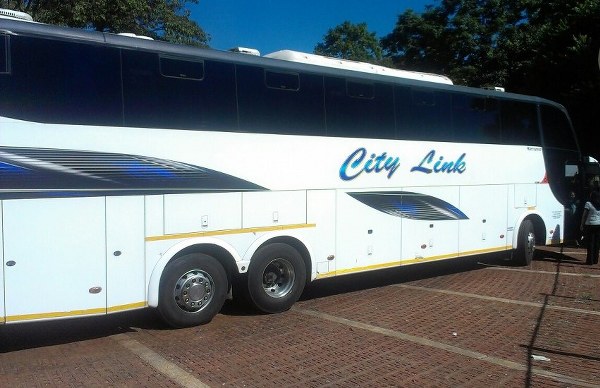 A BRAVE City Link bus driver yesterday saved the day when he grabbed the leg of an alleged robber who had snatched a bag containing about $10 000 as the bus was picking and dropping off passengers in Gweru.

The incident happened at around 4:30PM at the stop over which is used as a pick-up and drop off point by luxury buses passing through Gweru.

The bus was coming from Bulawayo going to Harare and it was not immediately clear whose money it was.

According to eye witnesses, the suspect, who was with an accomplice, disembarked from a White Subaru which had no number plates before entering the bus.

He then allegedly opened a compartment which contained the bag with the money.

“There was a bag suspected to have United States dollars in a small compartment. The robbers driving a white Subaru parked by the side of the bus before one of them disembarked, opened the compartment and grabbed the bag,” said the eye witness on condition of anonymity.

He said just as the robber was allegedly trying to make off with the money by jumping into the getaway vehicle, the alert driver grabbed his leg.

“The driver caught him rugby tackle style. The car sped off and left the driver and the robber wrestling on the ground. The driver shouted ‘thief, thief’, attracting members of the public and passengers who quickly intervened to apprehend the suspect,” said the source. He said the robber was allegedly assaulted before he was handed over to the police.

“Suspicion is that the robbers followed the bus from Bulawayo where they saw the driver putting the bag with money into the compartment. We understand from the driver that he was carrying over $10 000,” said the source.

He said this was the second time that the company was allegedly robbed of money using the same modus operandi.

When The Chronicle got to the scene, the police had just apprehended the robber identified as Sifiso Mapfumo from Bulawayo.