Zanu-PF’s representative in the United Kingdom and Europe, Nick Mangwana unwittingly revealed that President Emmerson Mnangagwa was placed on the top of the ballot paper to ensure that voters do not choose the wrong candidate.

The presidential ballot paper has been criticised by the opposition and civic society organisations for being illegal and for favouring President Emmerson Mnangagwa. Responding to a post on Twitter, which seemed to debunk the Zimbabwe Electoral Commission’s logic that the design of the ballot paper was the most economical, Mangwana spoke out against placing Mnangagwa in the middle as this would lead to voters making mistakes.

He goes on to say if people are unhappy with the ballot paper design, they should approach the court system.

Why is there such a big drive to make Zimbabweans Vote a President they don’t want by mistake? So you want to tuck away ED so that people would make mistakes? Is that a competent choice? This election should be determined in the will of the people and not by mistakes.

….If ZEC are breaking the law take them to a competent court for redress. You will not get justice TweetCourt. The opposition top table is comprised of some of Zim’s most litigious lawyers. Why are they not doing that? Because they know that they are on flimsy legal ground.

…A list that produced an unwieldy A3 ballot. Unless we are reading Arabic we start from the left. We only go to right column when done with the left. The only institution which can have a veto on ZEC here is the court. Not any other player. Let’s give them their autonomy. 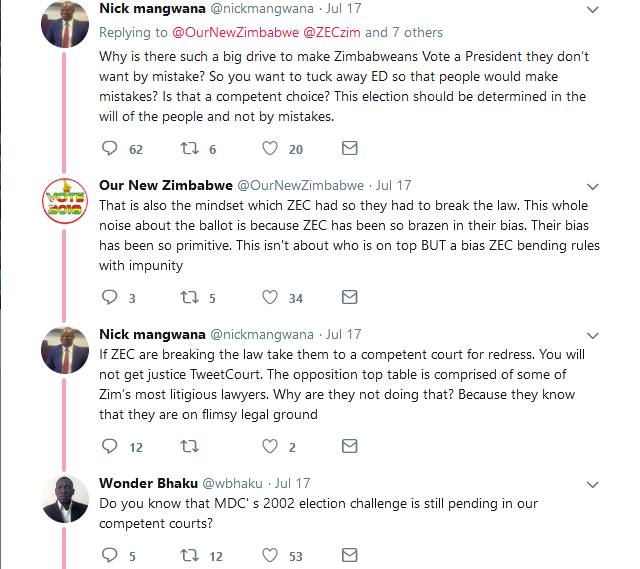