A sombre atmosphere must have engulfed the Zimbabwe Electoral Commission chairperson Priscilla Chigumba's world, reputation and credibility this morning after it was exposed that she is in a se_xual relationship with Mines and Mining Development Minister Winston Chitando of the ruling ZANU PF, a veteran media practitioner has revealed.

To prove his truthfulness and credibility in nailing the now very controversial electoral commission boss, former Sunday Mail Editor, Edmund Kudzayi, who has always been suspected to be the brains behind Baba Jukwa, an equally controversial faceless Facebook blogger who was extremely awesome in exposing top government and Zanu PF officials' secrets five years ago, just before the 2013 national elections, he dared the gravely humiliated Chigumba and her alleged se_xual partner-in-crime to sue him if ever they deny his allegations.

"These allegations expose me to the real possibility of prolonged and expensive legal action. Chigumba and Chitando have the money and influence. I have the truth, which they know. My work has been thorough and I am able and ready to defend it in a court of law, any time," Kudzai said in a juicy Twitter thread pre_gnant with damning information that marks the beginning of Chigumba's serious troubles.

"Chigumba is a judge of the High Court and she knows the implications of perjuring herself. If she denies and I prove, she is finished. Chigumba knows that her se_xual relationship with Chitando is a fact. Her silence in the face of a screaming scandal is a testament to this," he added.

According to Kudzayi, Minister Winston Chitando who is a close ally of President Mnangagwa, drafted a statement which he reportedly sent to Kudzayi through moles within the State Media, where Kudzai was once a senior official, that sought to keep his identity protected, but 'Baba Jukwa' would have none of it.

"Attached is a statement drafted for Chigumba & sent to me via emissaries at Zimpapers. The minister wanted me to use the statement on the condition that I don't publish his name. Chigumba's superiors did not allow her to sign the statement. This left the minister out to dry," he said. 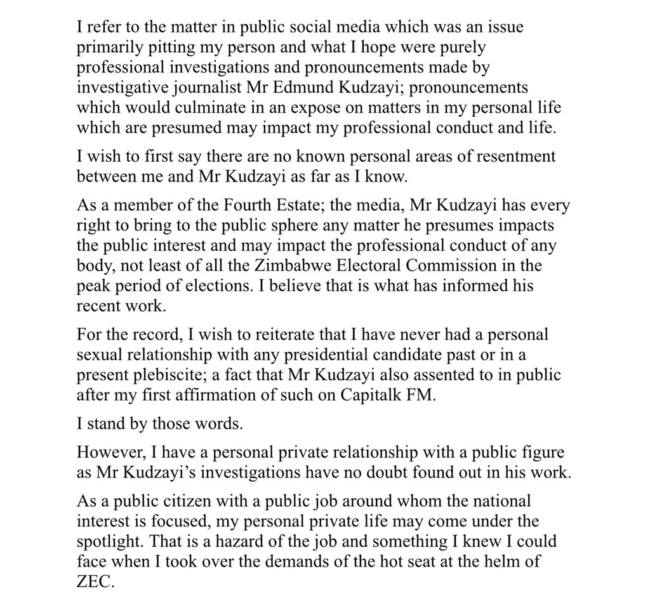 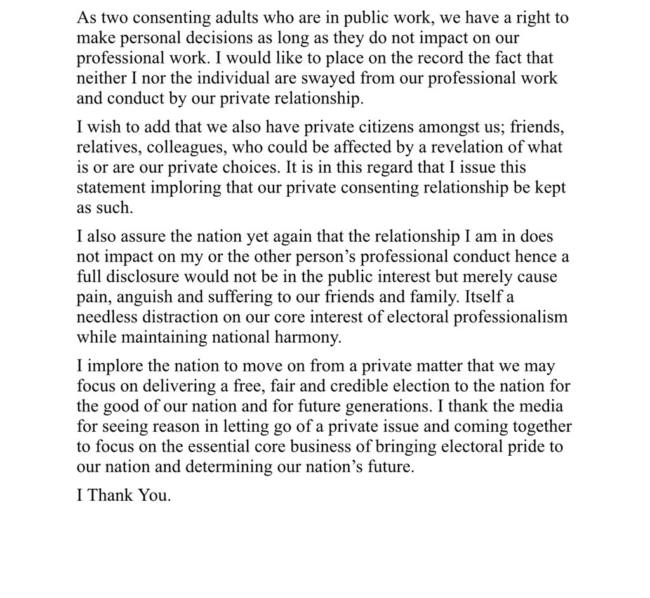 Kudzai said his work and expose was not intended to embarrass Chigumba and make hay out of her personal privacy, however he said, all he wanted was to prove to the nation and world at large that Chigumba is unfit to hold the highest office within the electoral commission.

"I don't intend to humiliate Chigumba or to invade her privacy tabloid style. All I seek is to expose a clear conflict of interest that likely explains Chigumba’s arrogance against overwhelming evidence of ZEC's mismanagement of the election. She is conflicted & must resign," he said.

Kudzai who is also a close associate of immediate former Minister of Higher and Tertiary education, Professor Jonathan Moyo, went on to explain why Chigumba on behalf of ZEC has been refusing to give in to opposition parties demands regarding electoral flaws spotted so far.

"We have seen a contrived and desperate ballot paper illegally designed to favour Mnangagwa. We have seen Zanu PF using VR [Voter Registration] phone numbers to illegally text voters. We have seen Chigumba illegally wearing a Zanu PF scarf. ZEC is obstinate & accountable to Zanu PF, not the voter."

"The ZEC chairperson is the last line of defence against electoral malpractice. As such, the person must be an upstanding member of society with probity that's beyond reproach. Can a woman who has an affair with a married cabinet minister be such a person? The answer is no," he blasted.

"Zimbabwe needs men and women of integrity to lead our constitutional bodies. Chigumba is not a woman of integrity or moral conviction. She has proven to be a Zanu PF puppet who was placed in the ZEC chair because, like Mudede and Makarau, she's ready and willing to play ball," he added.

In conclusion, Kudzai, who has denied being Baba Jukwa but confessed that he was Amai Jukwa – another faceless Facebook blogger, who however, wasn't as scathing in exposing Zanu PF ministers and senior officials as Baba Jukwa, said all he wants from Chigumba is to see her resigning from the hot chair for the interest of the public.

"So, ZEC chairperson Justice Priscilla Chigumba has a se_xual relationship with Zanu PF cabinet minister Winston Chitando. This presents a clear conflict of interest: if Zanu PF loses the election her lover will lose his job. She must do the right thing and resign. Ndatenda," he concluded.

Efforts to solicit a comment from both Chigumba and Chitando drew a blank as the mobile numbers of the alleged lovebirds were unreachable. When My Zimbabwe News phoned ZEC, she was said to be in a meeting.

Edmund Kudzai, born on 8 December 1986, is a well educated journalist and media professional. He is a former Marist Brothers and Churchil Boys High student, who has studied and completed a Chartered Institute of Management Accounting (CIMA) Diploma. He then went to Leeds Metropolitan University in the United Kingdom to study for a Bachelor of Laws degree (LLB) between 2008 to 2010.

To further equip himself, the veteran media practitioner, enrolled for a Software Engineering Degree at Huddersfield University in the UK in 2011. – Source My Zimbabwe News