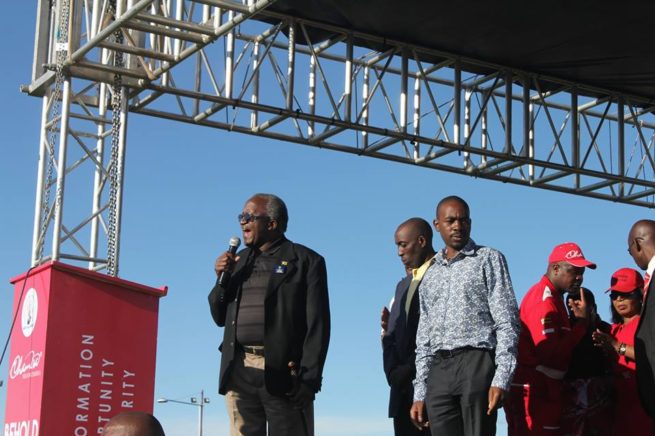 The day Saturday 21 July 2018 will never be forgotten in the history of democracy in Zimbabwe, two important issues happened. First, the presidential candidate (without war credentials) was endorsed by 'genuine war veterans' led by Dumiso Dabengwa. Finally, Sibangilizwe Nkomo (the son of liberation icon, the late Joshua Nkomo) has finally delivered the rod (tsvimbo) of leadership to Nelson 'Nero' Chamisa.

It was a day (Saturday 21 July 2018) when Joshua Nkomo, Herbert Chitepo, Josiah Magama Tongogara, Lookout Masuku and Morgan Tsvangirai turned in their graves. These icons died for one man/woman one vote. This should be a signal to ZEC, the spirit of the dead should not be taken for granted. Chitepo, Tongogara and Masuku died without enjoying the fruits of the struggle and this should be a signal to ZEC again.

There is no doubt that Dumiso Dabengwa is a living legend, the salute given to Nero by Dabengwa and his team of 'objective war vets' has just given Chamisa a 'sweeping victory' in Lobengulaland. If it was not the power of God, Dabengwa could have been killed by Chamisa's enemies during the time Masuku's life disappeared from him. There is no doubt that Masuku was 'chief priest' of the liberation of Zimbabwe' struggle, it was unfortunate that he was killed by 'the struggle within the struggle'.

The Afrobarometer's (latest) survey of last week has exposed ZANU PF again, there is no doubt that Dabengwa's endorsement of Nero has increased his points. Every evidence is pointing to the fact that, ED has no grip of ZANU PF. Khaya Moyo was relieved of his duties and reinstated within hours. What happened was a harbinger of confusion in within ZANU PF ranks.

The mistake which ED did was to refuse to publicly apologize for Gukurahundi massacre of 20,000 innocent civilians who were killed in cold blood. R.G Mugabe was better when he said 'it was a moment of madness'. ED's refusal to admit his evil contribution has managed to unite the Ndebele people against him in support of Nelson Chamisa. The Ndebele people are clever politically, they rejected their beloved daughter Khupe because of the Gukurahundi saga. The Gukurahundi genocide will continue to hound ZANU PF if pertinent measures are not taken to resolve the effects of genocide.

The late Joshua Nkomo's son has finally submitted the 'rod of power' to Nelson Chamisa, there is no doubt that the event shook ZANU PF to the core. During the period of Mugabe's leadership, he made sure that Nkomo family and Dabengwa were neutralized. However, ZANU PF of today has let them out of the box.

I respect Annan (the chief of elders) currently in Zimbabwe, but he should not interfere with the electoral democratic processes in Zimbabwe, Zimbabweans have a freedom to exercise their constitutional right to address injustices in electoral processes. I urge Chamisa and opposition not to be subdued by Annan/his team in their quest to bring ZEC to 'public' justice and order. Mr. Annan failed to help Zimbabwe's democratic space during the time of Mugabe. Why now? I respect him but he should allow Zimbabweans to exercise their constitutional right.

The SADC has demonstrated that they are not serious with Zimbabwe, an emergence summit on Zimbabwe should have been held by now? They only want to call for a summit post blood shade. The only people that Chamisa should look to are his supporters and not late comers. Conclusion It is now an open secret that ZEC has failed to handle the 2018 elections in a transparent manner. There is no doubt that the elections won't be credible because they have failed to meet the fair and transparent standards.

The only solution is for Chamisa and his team is to seek for justice from the 'public court' as per the dictates of the constitution of Zimbabwe. Elders and SADC have not yet shown seriousness and should not diverge the path of Chamisa and team.

Don Chigumba is a mixed methods research specialist, can be found on twitter @Donchigumba