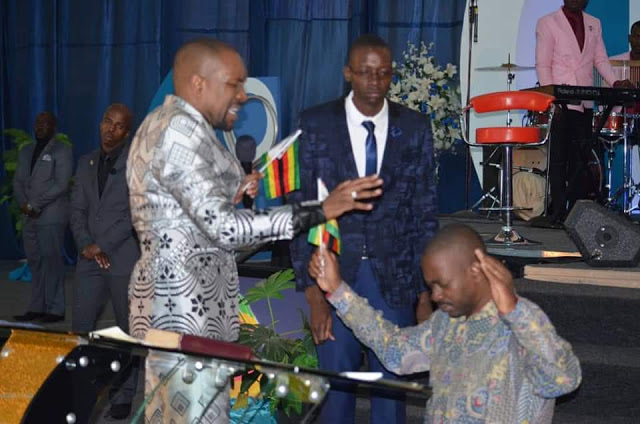 MDC Alliance presidential candidate Nelson Chamisa yesterday urged Zimbabweans to fast for the whole week to facilitate smooth transfer of power from the ruling Zanu PF party to the opposition after the July 30 elections.

Addressing thousands of supporters at Mkoba Stadium in Gweru, Chamisa said he was confident of victory adding that there was need for a week of national prayer and fasting to ensure smooth transfer of power from Zanu PF.

“This whole week (from Monday to Saturday) there is need for fasting,” Chamisa said.

“To all those who can (fast) please do so and fast for your country. Then on July 29, that is on Sunday, it should be a national day of prayer. We want to ensure a smooth cross-over.”

Chamisa’s call came after MDC Alliance women assembly early this month said they would fast every Friday for Chamisa for God to be with him in this election.

The women also declared that on July 30 they would camp close to polling stations until Chamisa gets keys to State House. The MDC Alliance leader told the gathering that there was not going to be a run-off in this year’s election as he would emerge the “ultimate winner” in the plebiscite.

“There is no run-off, in fact, there is a run over in this election,” he said.

Chamisa chided Zanu PF saying for the past three months the ruling party had become an opposition party, as they were regurgitating some of his promises to the electorate. He said the ruling party leaders, who used to mock him on the need for modern infrastructural development were also now talking of devolution, spaghetti roads and fast trains.

“They (Zanu PF leaders) are even carrying the message of change and you wonder how a 75-year-old like Mnangagwa (Emmerson) can talk of real change,” Chamisa said.

“I have not shed any blood and I will bring the transformation needed to run this country. Mnangagwa and other national liberation icons have played their part. I am merely tracing the footsteps of the likes of Joshua Nkomo and Herbert Chitepo, among others, who fought for the one-man-one-vote principle.”

Chamisa said his call for electoral reforms could not be equated to boycotting polls, adding that the issue of free and fair elections was a national issue.

He said there was no compromise in fighting for an even playing field in this year’s election, saying his party would use “instruments of peace” to make sure the election was not rigged.

“We will do whatever it takes to make sure your votes counts,” he said.

Chamisa said after July 30 the country was moving from a “dispensation of rulers” to that of leaders.

He castigated Mnangagwa for saying Zimbabwe was open for business when he was failing to open it for locals who had potential to turnaround the economy.

“Let us open business for Zimbabweans first and then we can look outside the country,” he said.

The MDC Alliance leader ended his address by a closing prayer where he prayed that the country be given a leader who could “write Psalms in State House”.

He also prayed that the country moves from “institutionalised idolatry of leaders” to a nation of God-fearing leaders.
National Patriotic Front chairperson Eunice Sandi-Moyo, told the gathering that her party was fully behind the candidature of Chamisa and urged people to vote for him.

She said her party did not recognise last November’s Operation Restore Legacy carried out by the military in support of Mnangagwa, adding that the move was a national disgrace.

She said it was now time for the country to be taken forward by a “vibrant and energetic” leader like Chamisa.