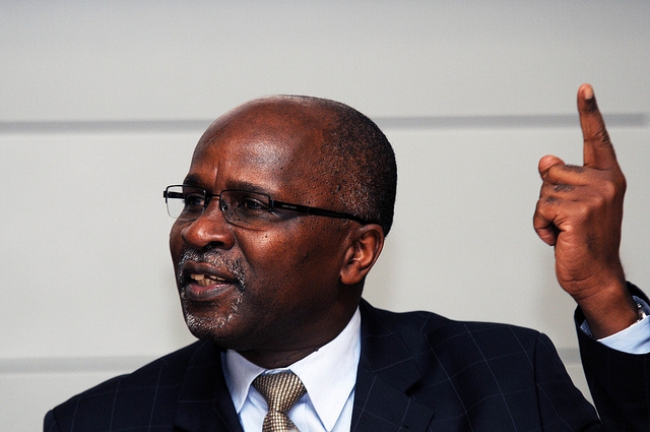 MDC Alliance leader Nelson Chamisa’s declaration that he will reject any electoral outcome that does not favour him has attracted the attention of a regional network of poll observers led by former Sadc secretary general Tomaz Salamao.

Salamao told a Press briefing in Harare yesterday that his group will engage the opposition presidential candidate and give him their advice.

He was responding to questions from journalists regarding utterances attributed to Chamisa who is seen as posing the greatest challenge to President Emmerson Mnangagwa’s bid for a first full term after taking over from former Zanu PF leader Robert Mugabe, who was forced to resign last November.

“If anyone has made those statements we will at the appropriate time engage him to advise that in democracy there are rules. There are winners and losers, they should be prepared to lose,” Salamao said.

Chamisa has accused the Zimbabwe Electoral Commission (Zec) of working in cahoots with Zanu PF to create conditions for a Mnangagwa victory in Monday’s elections.

Salamao urged caution, adding Zimbabweans have a date with destiny.

“We are here to help and advice Zimbabweans. Please do your best to take your country forward politically and economically.

“We will encourage citizens to go and vote on July 30. We will meet political parties and we will advise them to do their best to observe democratic rules. In democracy, there are winners and losers,” the former Sadc chief said.

The mission also includes respected Roman Catholic cleric Father Fidelis Mukonori, who is credited with brokering a deal between Mugabe and the country’s military, leading to the former President’s resignation.

Salamao said his team will make an effort to meet with Mugabe.

“We will try to meet him and ask of his health as well as his feeling of the environment,” he said.

Yesterday, the Common Market for Eastern and Southern Africa (Comesa) election observers’ leader and Egyptian diplomat, Ashraf Rashed promised his team will assess the elections in a non-partisan manner.

“We are not here to judge what is reasonable or what is not in terms of demands by political parties, we are here to listen and to observe,” he said during the launch of the 19 member mission.

Rashed said he will be meeting with the MDC Alliance and other opposition parties, civic society, the media and other stakeholders in order to capture their concerns which they would then transit to Zec.

“We managed to convey some of the issues they raised to government and Zec, and the chairperson Justice Priscilla Chigumba stressed to all parties that we should have a peaceful election. I believe that all political parties will adhere to those principles because it is a step towards Zimbabwe’s progress and democracy,” he said.

“Any contestation of the elections should be done through legal processes, and according to the Constitution. We are not here to interfere; we are here to observe which is different from intelligence work. We will go through the normal processes to try and have a fair assessment of the process.”