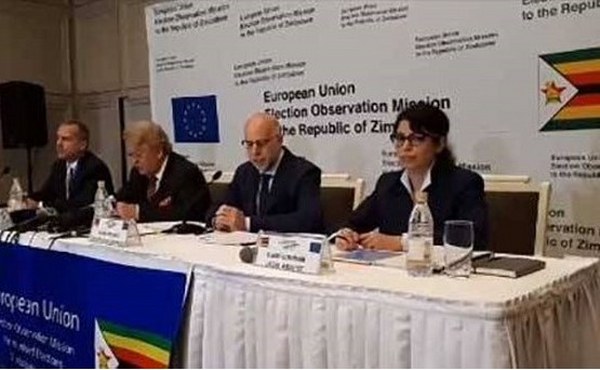 The European Union Election Observation Mission (EU EOM) to the Republic of Zimbabwe has issued a preliminary statement in which it said that playing field for the 2018 harmonised elections was not level. The EU EOM highlighted issues such as media bias towards the ruling party, coercion and intimidation by traditional leaders, vote buying and abuse of state resources by the ruling party.

We publish the statement in full below:

Improved political climate, inclusive participation rights and a peaceful vote, but unlevel playing field, intimidation of voters and lack of trust in the process undermined the pre-election environment. We now hope for a transparent and traceable results process.

This preliminary statement of the EU EOM is delivered before the completion of the entire electoral process. Critical stages remain, including collation of results and adjudication ofpetitions. The EU EOM is now only in a position to comment on observation undertaken to date, and will later publish a final report, including fidl analysis and recommendations for electoral reform. The EU EOM may also make additional statements on election-related matters as and when it considers it appropriate.

The 30 July 2018 Harmonised Elections in Zimbabwe were the first since the stepping down from power of the former president Robert Mugabe after 37 years in office. Many previous elections have been contentious and with reports of abuses, and so while the commitment to hold credible elections by the interim president was welcomed, a legacy of the past was a low level of trust in the democratic process and institutions, which permeated the electoral environment.

The elections were competitive, the campaign was largely peaceful and, overall, political freedoms during the campaign, including freedom of movement, assembly and speech, were respected. However, the misuse of state resources, instances of coercion and intimidation, partisan behaviour by traditional leaders and overt bias in state media, all in favour of the ruling party, meant that a truly level playing field was not achieved, which negatively impacted on the democratic character of the electoral environment.

The Zimbabwe Electoral Commission (ZEC) undertook a biometric registration of voters and put in place administrative arrangements for polling as scheduled. Stakeholder confidence in the institution, however, was lacking, due to a lack of transparency and inclusivity and poor communications. A seems of decisions, including on the layout of the presidential ballot, raised concerns about its impartiality. The new voter roll was generally inclusive, though it was not adequately shared with stakeholders and has some errors and changes which need to be clarified.

On Election Day, EU observers reported a large turnout and a generally well-managed and peaceful process. However, in some places them were reports of a high number of assisted voters and of voters not found on the voter roll. The count at the polling stations was fairly well organised, though with some inconsistent organisational practices. It was noted that while the result sheet was posted outside the polling stations in a majority of places, this was not the case everywhere.

The legal framework provides for key rights and freedoms for the conduct of competitive elections. However, shortcomings in the Electoral Act and the absence of campaign finance regulations limit the integrity, transparency and accountability of the process. Furthermore, delays in adjudication, dismissal of court cases on merely technical grounds and a number of controversial judgments compromised the right to an effective legal remedy.

The introduction of a number of legal and administrative changes was welcomed, including increasing the number of polling stations, limiting voters to voting only at their registered station, and limiting the number of excess ballots to be printed. ZEC put in place administrative arrangements for the holding of the 30 July polls as scheduled. However, the potentially positive measures were undermined by ZEC’s persistent lack of inclusivity and transparency. Further, the election management body became embroiled in a number of contentious issues, including the layout of the presidential ballot, modalities for printing and distributing ballots, poor procedures for confirming ballot security between printing and election day and the conduct of postal voting. ZEC also failed to make full or proper use of the Multi-Party Liaison Committees (MPLCs). These issues contributed to a deterioration in the relationship between the electoral commission and the opposition in the weeks before the election.

The switch to biometric voter registration (BVR) so close to the time of the election was a major challenge for ZEC, which assumed responsibility for the roll for the first time. Data indicates a reasonable capture rate for eligible voters, though with lower levels of registration in urban areas in particular and a number of errors which remain to be resolved. The manner of sharing the voter roll with stakeholders proved contentious and, while acknowledging the effort ZEC made in undertaking the BVR, its lack of transparency and failure to provide clear and coherent information about voter registration overall added to a sense of mistrust by stakeholders.

The campaign was largely peaceful, with freedoms of movement, assembly and expression respected, and both the main presidential candidates held numerous rallies across the country. However, while political rights were largely respected, there were concems regarding the environment for the polls and the failure to achieve a level playing field. Observers widely reported on efforts to undermine the free expression of the will of electors, through inducements, pressure and coercion against prospective voters to try to ensure a vote in favour of the ruling party. Such practices also included direct threats of violence, pressure on people to attend rallies, partisan actions by traditional leaders, collection of voter registration slips and other measures to undermine confidence in the secrecy of the vote, manipulation of food aid and agricultural programmes and other misuses of state resources.

Based on EU EOM monitoring, the state broadcaster, the Zimbabwe Broadcasting Corporation (ZBC), failed to abide by its legal obligation to ensure equitable and fair treatment to all political parties and candidates. State-owned TV, radio and newspapers, which dominate the media landscape, were heavily biased in favour of the ruling party and incumbent president in their election-related coverage. Media operated in a generally free environment during the campaign and freedom of expression was respected. The legal framework for media, while providing for fundamental rights, needs further improvement to bring it into line with the Constitution.

In the direct election for the National Assembly, only 14.75% of candidates were women and women were nominated in just 126 of the 210 seats. But via the additional proportional list system for the Assembly, a large number of women will nevertheless be elected to parliament.

On the day of the election EU charmers reported positively on the conduct of voting. Zimbabwean citizens turned out in large numbers and despite some lengthy queues the voting process was managed well by polling officials who worked hard to process voters. Some problems with the voter roll, or lack of voter awareness of their polling location, were evident. Party agents mere present in most places, but polling officials did not always check for indelible ink. Further, there appeared to be a high degree of assisted voting in some places. The vote count in polling stations was reasonably well organised, though procedures were not always followed, inconsistencies were noted and there was inadequate light in some places. The result was posted at the polling station in many instances, but not all. The collation of results is on-going and we continue to observe this. It is important that the final results are shared in a manner which provides for full transparency and accountability, including a breakdown by polling station.