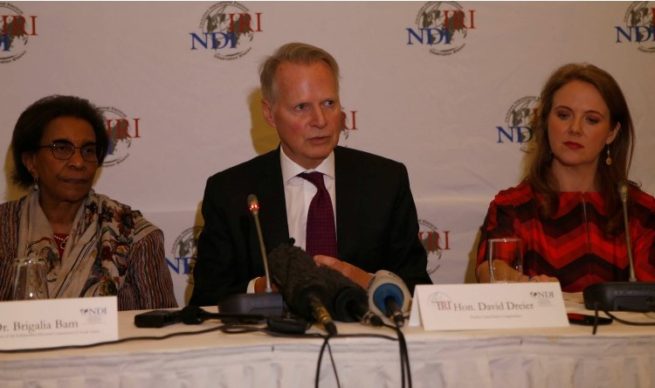 Zimbabwe’s general elections marked an improvement over votes during the rule of former President Robert Mugabe, but were still marred by abuses including the use of food assistance to bolster the campaign of the ruling party, two U.S. observer groups said.

The International Republican Institute and the National Democratic Institute said that while the campaign was relatively free, there were “numerous incidents” of food and agricultural assistance and “extreme media bias” being used to secure support for President Emmerson Mnangagwa’s Zanu PF.

Earlier, the European Union said Zimbabwe didn’t achieve a “level playing field” in the presidential and parliamentary elections on Monday.

“The delegation notes several improvements to the electoral process compared to Zimbabwe’s past elections, though equally important problems give rise to deep concerns that the process thus far has not made the mark,” the U.S. observers said in an emailed statement.

Zanu PF secured a landslide win in the parliamentary election, while the count in the presidential race is continuing. The opposition Movement for Democratic Change has said it may challenge the results.

The final verdict on the fairness of the vote will be key to the southern African nation’s efforts to rebuild after two decades of decline under the rule of Mugabe, who was ousted in November after a brief military intervention.

“The improvements were likely insufficient to build broad public confidence that voters could make a choice adverse to the ruling establishment without fear of violence or other retribution should the position prevail,” the U.S. institutes said.