United Kingdom legislator Katey Hoey has urged her government, the European Union (EU) and the United States government not to change its policies towards Zimbabwe until Retired General Constantino Chiwenga is removed from his Vice Presidency and his position as Defence Minister.

Speaking on Twitter, Hoey who is Member of Parliament for Vauxhall said:

There should be no change to @P_VanDamme_EU or @UKinZimbabwe or American government policies to Zimbabwe government until at the very minimum Chiwenga is removed from his Vice Presidency and his control of the military. 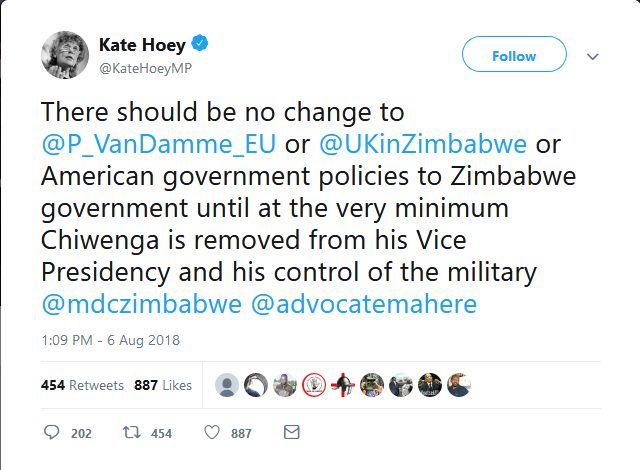 Hoey visited Zimbabwe between May 31 and June 4 this year. Her comments come after soldiers opened fire on unarmed civilians during an anti-Zimbabwe Electoral Commission (ZEC) protest. Seven people died from the incident.

News Cynthia Goba - 21 September 2020 0
A 59-YEAR-OLD Bulawayo man has appeared in court for allegedly rap_ing his 16-year-old step granddaughter after prop0sing love to her. The man from Nketa 8...
Loading...