Masvingo Provincial Affairs minister Josiah Hungwe has backtracked on his suggestion in May that President Emmerson Mnangagwa could even “shoot” to retain power saying he never uttered those words.

Hardly a week after deputy minister of Finance Terrence Mukupe triggered outrage by suggesting that the military will not sanction any transfer of power from Zanu PF if Mnangagwa lost the just-ended presidential elections last week, Hungwe rubbed salt into the wound by claiming that the army would help the incumbent cling to power. 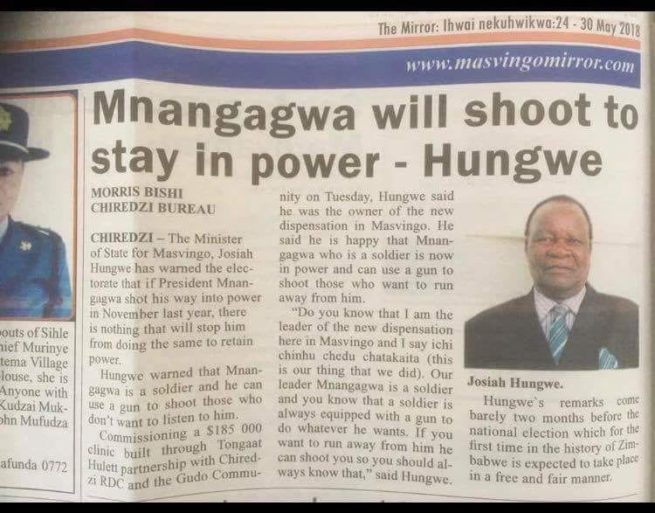 However, with the shooting incident that saw seven people being killed by the military during election results protests last week, Hungwe appears to realise the folly of his utterances.

Responding to the Daily News inquiries about whether he felt his statements were being vindicated as people were gunned down by soldiers, Hungwe denied ever having said that.

“You cannot make a story out of it. It is not fair because I was not there when what you are reminding me was allegedly said, it is your creation so look for other people to talk to not me,” Hungwe fumed as he hung his mobile phone before switching it off.

In May, a provincial weekly publication, the Mirror, quoted Hungwe, reminding his audience at a rally in Chiredzi that if Mnangagwa could shoot his way into power in November last year, then there was nothing to stop him from doing the same to keep himself in office.

“Do you know that I am the leader of the new dispensation here in Masvingo and I say ichi chinhu chedu chatakaita (this is our thing; it’s our creation)” he was quoted saying.

“Our leader Mnangagwa is a soldier and you know that a soldier is always equipped with a gun to do whatever he wants. If you want to run away from him he can shoot you so you should always know that,” Hungwe said, while commissioning a clinic.

His remarks added fuel to the fire, as they resonated with sentiments by Mukupe who sensationally claimed that the uniformed forces will not allow MDC Alliance leader Nelson Chamisa to rule if he wins this year’s election.

Mukupe, who lost the Zanu PF parliamentary candidate for Harare East constituency, to MDC Alliance’s Tendai Biti made the remarks at a campaign rally in the constituency ahead of harmonised elections held on Monday last week.