This memorandum serves to put on the record that-:

On 8 August 2018 at around 0600 hours, wanted person Tendai Luxton Biti no further particulars supplied arrived at Chirundu One Stop Border Post, Exit Side, Zambia. He was in a Toyota Hilux Double Cab, White in colour, registration number ADA7273 which was being driven by Tawanda Blessing Chitekwe NR 48-112236-H-48 DOB 14/01/82 and Residential address not supplied.

He was also in the company of two other male occupants whose identity has not been established.

Upon arrival at the border, which is geographically located across the Zambezi River on the Zambian soil, the wanted person then gave a Zambian agent their passports who avoided Zimbabwe Immigration formalities and presented the passports to Zambian Immigration Officials.

The Zambian Immigration Official grabbed the passports and informed Zimbabwe Immigration official by the name Shingirai Chimedza about the issue since Zambia Immigration was aware that accused Tendai Luxton Biti was wanted in Zimbabwe.

Members of Criminal Investigation Department, Chirundu who were manning the vehicle clearance desk on the Zambian side were also notified about the issue. The team then sought for reinforcement from the station.

The information was reacted upon by police officers and President’s Office. The accused person and his associates were approached and he strongly resisted arrest arguing that he was protected by International law since he had already crossed the Zambezi river and was in the process of applying for Asylum.

He went further to state that police officers had no right to interview him on foreign soil hence all the accused persons refused to furnish their full particulars.

At the same time, Tendai Luxton Biti shouted on top of his voice saying he was being abducted and called for assistance from Zimbabwean travellers going to Zambia numbering approximately 300 people.

Members of the public joined in and refrained security agents as they were effecting arrest on the accused person and his associates.

Since there was commotion, Zambia authorities joined in and assisted Zimbabwe authorities and took the accused person and his associates to Immigration offices, Zambia.

The Zambian state agents then had an interview with the Wanted person and his associates. They ordered the Zimbabwe security agents not to enter their office.

After sometime, the Zambian authorities being led by number 10961 Detective Inspector Mwabawho is the Officer-In-Charge CID Chirundu Zambia without considering the Chirundu One Stop Border Post Concept then threatened Zimbabwe authorities with arrest for executing their mandateon Zambian soil.

They also refused to have an urgent D-JOC meeting with Zimbabwe authorities.

A team of Zambia Para Military Troop armed with AK 47 Rifles came to the border and escorted the accused person, his associates and the Toyota Hilux vehicle which had not been tendered for clearance by Zambia Police Service, Chirundu.

Matter is being investigated by CID Law and Order Harare under DR 16/08/18. 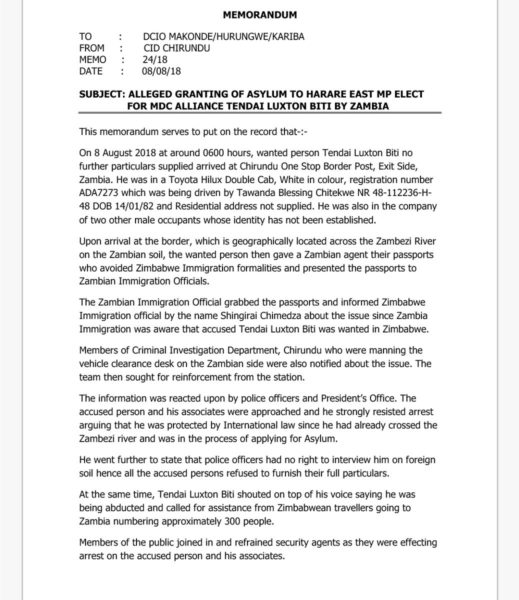 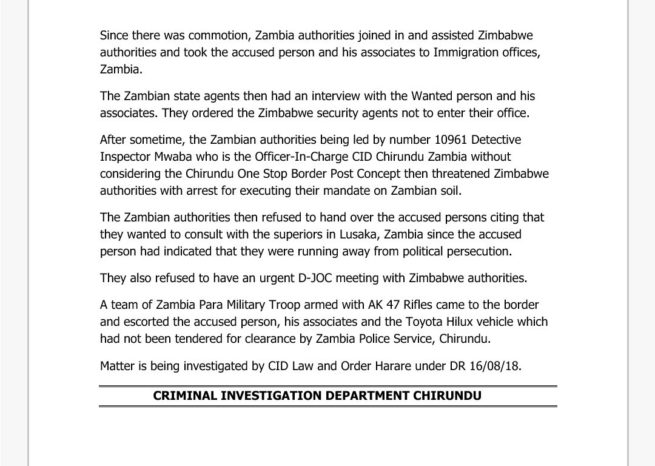 News Muza Mpofu - 30 September 2020 0
Tapiwa Makore (senior) (57), the suspect linked to the murder of a seven-year-old Murehwa boy in the company of his herdboy Tafadzwa Shamba has...

Videos & Pics Sekai Moyo - 30 September 2020 0
A speeding Nissan March killed one person on the spot after the driver failed to control it at Pembi bridge, Mvurwi this morning. When Bulawayo24...
Loading...