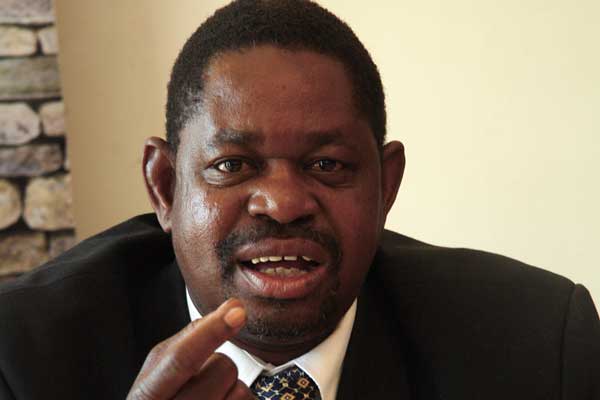 Mr Nelson Chamisa and his MDC-Alliance cannot prove to the Constitutional Court that presidential election results announced by the Zimbabwe Electoral Commission (ZEC) were wrong as they did not make use of a provision in the Electoral Act which allows for the recounting of votes within 48 hours, the Zanu-PF legal team has said.

Zanu-PF will this morning file opposing papers against the election petition.

In an interview with The Herald yesterday, Zanu-PF secretary for Legal Affairs Cde Munyaradzi Paul Mangwana queried the wisdom of claiming that the election results were wrong without requesting a recount as provided for by law.

Official results from ZEC indicate that President Mnangagwa narrowly won the elections with 50,8 percent of the votes cast, beating Mr Chamisa who got 44,3 percent.

In his appeal, Mr Chamisa claims to have won the majority of votes and that the results announced were manipulated.

He, however, did not demand a recount in any offending polling station within 48 hours of the final announcement on August 3, as he was entitled too, in order to prove that the results were wrong.

Section 67 A (1) of the Electoral Act (Chapter 2:13) that deals with Recounting of Votes states that: “(1) Within forty-eight hours after a constituency elections officer has declared a candidate to be duly elected in terms of Section 66 (1), any political party or candidate that contested the election in the ward or constituency concerned may request the Commission to conduct a recount of votes in one or more of the polling stations in the ward or constituency.

“A request for a recount made in terms of subsection (1) shall:

a) be in writing, signed by an appropriate representative of the political party or candidate making their request; and

b)state specifically the number of votes believed to have been miscounted and, if possible, how the miscount may have occurred, and

c) state how the results of the election have been affected by the alleged miscount.”

Cde Mangwana said if the MDC-Alliance was serious about having been robbed of an electoral victory, they would have made use of relevant legal provisions at their disposal.

“They did not make use of that provision. If they felt that the votes were not properly counted, they had the option to request a recount. They cannot prove before the court that the results were wrong as they do not have the correct results,” he said.

Cde Mangwana told ZBC News yesterday that a 12-member legal team was ready for the responses to litigation by Mr Chamisa, with the opposing papers bearing testimony of the party’s commitment to safeguard the interest of the electorate.

“Indeed we shall be filing our opposing papers tomorrow (today) by 10am and we are ready for whatever they are arguing as we are really committed to the case,” he said.

In his much-hyped application, Mr Chamisa is challenging among other things the announcement process. He claims that the results are not credible simply because ZEC chair Justice Pricillah Chigumba delegated the announcement of provincial presidential results to fellow commissioners.

“By our law, results of a presidential election must be announced by the chairperson. In casu, the chairperson delegated, in her presence, the task to all the commissioners. This was in breach of mandatory statutory provisions. No explanation exists for this breach,” his lawyers wrote.

Other irregularities cited by Mr Chamisa’s lawyers include the announcement of results on a provincial basis instead of per constituency.

As a result of the so-called breaches, Mr Chamisa is asking the Constitutional Court to declare him the winner of the presidential elections or alternatively to order a fresh poll.

Cde Mangwana told our sister paper, The Sunday Mail, that the MDC Alliance missed the deadline to serve its poll petition on President-elect Emmerson Mnangagwa and also did not serve the papers at the address the President-elect provided to ZEC for purposes of the election.

Further, the bulk of the other 21 Presidential candidates cited as respondents in the MDC Alliance’s petition said they had not been served with any papers, with some slamming Mr Chamisa, for trying to drag them into his battles.

Zanu-PF wants the Constitutional Court to dismiss the petition.

Spokesperson for Dr Thokozani Khupe’s MDC-T, Mrs Priscillah Misiharabwi-Mushonga said: “The last time I checked with Dr Khupe that was around 2pm (yesterday) she had not received anything. However we will let the courts decide and we will go with whatever the courts decide.”

Mr Divine Mhambi Hove of the Nationalists Alliance of Patriotic and Democratic Republicans said he found it strange that prior to the polls, Mr Chamisa claimed he had put in place “anti-rigging mechanisms” but was now claiming that the elections were rigged.

“I understand being a respondent does not necessarily imply mean that I am co-implicated in the allegations, but it’s just that I participated as a Presidential candidate. So it won’t make any difference for me, so there is no way I am going to be bothered.

“The Alliance took some of us and our advice for granted and they thought they should play it alone, so I hope it’s a lesson for him.”

Democratic Opposition Party Presidential candidate Mr Harry Wilson said: “As DOP, we are surprised because we have not personally challenged ED’s win; neither did the MDC Alliance approach us as they prepared their challenge so we could put our input.

“We are also not part of the Alliance, we do not share their vision and we have no obligation to fight in their corner. As DOP, we have no evidence that can be reason to fight their claim that Chamisa won the Presidency.

“As DOP, we are happy with the Presidential vote, we scored throughout the country and this is an indicator that our future is promising and intact.”

Dr Blessing Kasiyamhuru, the Presidential candidate for the Zimbabwe Partnership for Prosperity, said Mr Chamisa was delaying the inevitable.

“They are trying to make the process long so as to delay the inauguration of ED. We are victims and not defendants, unless Chamisa’s lawyers are seeking a trial where they want to go against everyone. I just saw the papers and my name on social media, I have not been served with those court papers.”

Mr Peter Mapfumo Gava of United Democratic Front weighed in: “I kindly urge both Mr Mnangagwa and Mr Chamisa to put Zimbabweans and Zimbabwe first. Our people have suffered for too long and the time to give them a better life is now. It is not all about us as leaders but our people.”

The president of the Republicans Party of Zimbabwe Mr Kwanele Hlabangana said he was out of town but had not been served with the papers.

Alliance for the People’s Agenda President Dr Nkosana Moyo said: “I have not been served with papers as yet so I am not in position to comment until I have seen the papers.”

“I am not aware of the court application. However I wrote to President Mnangagwa and I congratulated him on winning the elections. I have since accepted the results. We do not need a court challenge; we need a way forward. We need to work together as Zimbabweans and this what I highlighted in the congratulatory letter to President Mngangawa.”

United Democratic Alliance president Mr Daniel Shumba said he supported the court poll petition although he was still to be notified about it.

“As UDA, there are areas we feel the results were manipulated. We have the evidence and we are going to present it at a later stage. So we totally agree with the court application by MDC Alliance.”

Reverend Everisto Chikanga of Rebuild Zimbabwe added: “We have not been notified or served with the court papers. However we feel that if there is a dispute it should be solved amicably so that it does not haunt future generations. Taking it to court is the right channel. As a party we are now waiting for court ruling on the matter and we have not yet accepted the results.”

Mr Willard Taonezvi Mugadza of Bethel Christian Party said, “I will abide by the constitution. I have not been served – maybe by end of next week.”

Co-President of the #1980 Freedom Movement of Zimbabwe Dr Francis Danha said the MDC Alliance was within its Constitutional rights to approach the courts; while the vice-president of United Democratic Movement, Pastor Patrick Mugadza, said his party had not been served with the court papers but would support the poll petition.

“We were notified through the press that UDM president Mrs Violet Mariyacha has been cited as a respondent on the Alliance petition. We are happy with the court challenge as we have noticed some anomalies ourselves.

“We have not been officially handed the court papers, but as a party we believe that it is his constitutional right to approach the highest court. However, we doubt there will be any positive outcome from the courts in favour of the Alliance.”