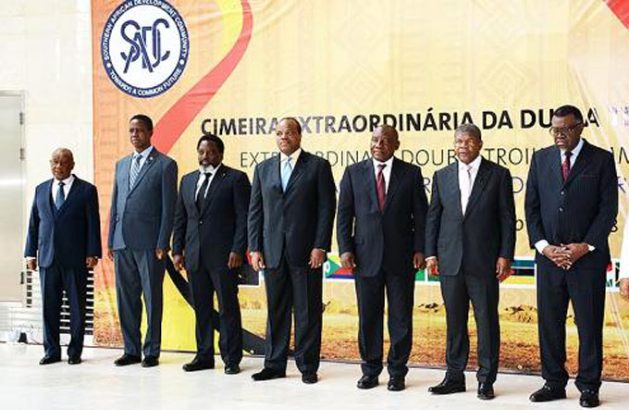 Zimbabwe's civil society has asked the Southern African Development Community (Sadc) to discuss Zimbabwe’s military-led post-election reprisals that have led to democratic regression and the contestations around the legitimacy and accuracy of the election results at a summit of the regional bloc in the Namibian capital Windhoek today.

Southern Africa’s regional body is convening an ordinary summit of the heads of State and government amid disagreements in Zimbabwe over a presidential election in which the Zanu PF strongman Emmerson Mnangagwa narrowly beat opposition leader Nelson Chamisa — who has since challenged that result in the Constitutional Court (Con-Court).

Sadc, currently chaired by South Africa’s President Cyril Ramaphosa, who is handing the reins today to Namibian President Hage Geingob, has been asked by Zimbabwe’s civil society to broker talks between Mnangagwa and his adversary Chamisa.

Mnangagwa is due to attend the Sadc summit, accompanied by Foreign minister Sibusiso Moyo and other government officials.

Crisis in Zimbabwe Coalition (CiZC) — a conglomeration of more than 80 civil society organisations in Zimbabwe working for democratic change — said Sadc “must call for and support dialogue between political actors as well as an inclusive conversation on Zimbabwe’s future”.

“The Sadc community together with other global players must institute discussions on the situation in Zimbabwe and develop a political and economic rescue package that is predicated on democratic progress,” the coalition said.

It also urged “the regional community of people to continue standing and fighting in the corner of Zimbabwe and its people rather than political elites.”

Zimbabwe’s civil society also wants Sadc to make an unequivocal statement condemning the illegal infractions against people’s rights in Zimbabwe, including holding sacrosanct citizens rights to life and protection by the state, as well as discouraging impairments of rights of the media and ordinary Zimbabweans.

There were reports of domestic and foreign journalists injured or beaten by the army while covering events that took place in Harare during the clashes.

This came after the military swept into the capital Harare to disperse protesters after the Zanu PF won a parliamentary majority in the vote.

At least six people were killed in those clashes.

Civil society wants Sadc to force government to facilitate impartial and independent investigations into the Harare shootings and assaults of civilians by members of the military.

“Such investigations must establish culpability with guilty parties subjected to the course of the law,” the Crisis in Zimbabwe Coalition said.

The influential civil society body said 2018 elections constituted a turning point and a critical juncture that could have allowed Zimbabwe and Zimbabweans to look forward to the task of rebuilding and making Zimbabwe great again off a clean political slate with limited to no legitimacy challenges on the state and those presiding over it.

Now that the 2018 process lacks legitimacy and was undemocratic, Zimbabwe finds itself at a similar political moment to 2008.

While difficult, civil society said the situation is not intractable, especially if Zimbabwe and the interested international community learn from the 2008 experiences. It asked Sadc to take actions that can assist to rescue Zimbabwe from reverting back to the twin crisis of legitimacy and governance which have dogged the state since 2000.

“Zimbabwe must return to full norm compliance in modern statecraft where the military is subordinate to civilian authority and does not interfere with civilian political processes.

“The Zimbabwean government must stem impunity and ensure an independent and credible process to investigate the murders of civilians on the 1st of August 2018 at the hands of the army.”

Civil society is also pushing that the military immediately return and stay in the barracks through leaving communities and roads where it is present.

It also wants Sadc to force the Zimbabwe military to halt human rights abuses on defenceless citizens and uphold the supremacy of Chapter 4 of the Constitution.

It said Zimbabwe must move forward towards democratisation and away from the twin crises of poor governance and illegitimacy.

“Citizens of Sadc are encouraged to remain in solidarity with the people of Zimbabwe, lobby their governments to do right by and stand with the citizens of Zimbabwe and demand that their will be respected and the security guaranteed,” the coalition said.

It said the July 30 election failed to demilitarise civilian political processes, a mandate that the election carried in the aftermath of the November 2017 coup and also failed to meet the democratic test, and as a result, the emergent state lacks political legitimacy.

Crisis in Zimbabwe Coalition said the election was supposed to represent Zimbabwe’s return to norm compliance through demilitarising of political processes and a credible election.

“Failure means that Zimbabwe is back to similar political movement to the 2008 election impasse with a governance and legitimacy crisis looming, undergirded by a military dictatorship,” the CiZC said.

The heads of State and government summit has been preceded by meetings of Foreign ministers at Safari Court Hotel and Conference Centre in Windhoek, Namibia.

It remains unclear if delegates at a foreign ministers meeting will take up the Zimbabwean civil society suggestion forward.