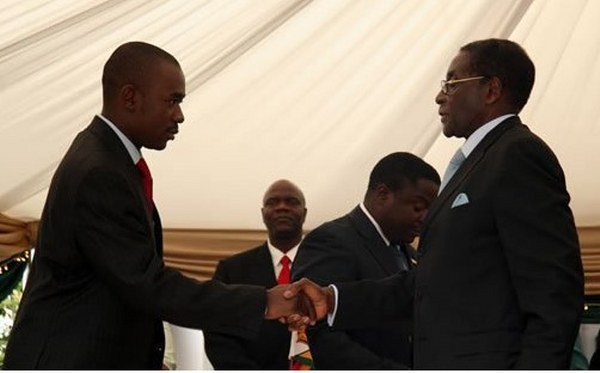 Former president Robert Mugabe risks losing most of his farms and mining claims as his erstwhile colleagues in the ruling Zanu PF hit back at the 94-year-old teetotaller for supporting MDC Alliance leader Nelson Chamisa at the just-ended polls.

Mugabe, who was removed from power last November, angered his former comrades when he threw his weight behind Chamisa ahead of a crucial July 30 poll won by his successor, President Emmerson Mnangagwa, by a small margin.

He has tried to atone for the shift in allegiance by congratulating Mnangagwa on his poll victory, but the gesture is being dismissed as too little, too late.

Znlwva will soon petition government to rename the national asset to Harare International Airport on the basis that the former Zanu PF leader “sold out”.

Mid last week, there were attempts to seize the former first family’s mining claim in Mazowe by Zanu PF functionaries.

Significantly, the Mugabes, who are understood to own more than 15 farms, would be stripped of the properties so that they comply with the one-man one-farm policy.

Mnangagwa told the Independent Foreign Service, that they were still ascertaining how many the Mugabes own and will trim the number of farms that his predecessor has if he owns more than one farm.

“I am still receiving evidence of what the (former) first family had. When that process is complete they will select one farm and the rest will be given elsewhere.
It’s not a question of voluntarily giving up, but about complying with the policy,” he said.

Signs that his erstwhile colleagues mean serious business are already on the wall.

Whereas the Mugabes had privatised use of Mazowe Dam during their reign, last week the ministry of Environment, Water and Climate took over the dam and effectively shunted out the former first family.

Already, boat cruising and other recreational activities have returned to the dam that was once a no go area.

The Zimbabwe National Water Authority (Zinwa) issued a statute barring individuals from claiming the dam, citing Section 4 of the Water Act which states that there should be no private ownership of water.

“No person shall be entitled to ownership of any water in Zimbabwe and no water shall be stored, abstracted, apportioned, controlled, diverted, used or in any way dealt with except in accordance with this Act. (2) Subject to this Act, a permit issued in terms of this Act shall confer upon its holder a right to the use of water in accordance with the permit,” said Zinwa.

While former first lady Grace Mugabe had taken over Manzou Farm which lies in the precincts of her sprawling empire in the picturesque Mazowe mountains — the villagers she had driven out are back in full force.

A Professor of World Politics at the London School of African and Oriental Studies Stephen Chan said Mnangagwa was desperate to demonstrate to the world that he means business and the Mugabes would not be an exception in his bid to demonstrate that no one is above the law.

“With all of the controversy surrounding the elections, especially the violence that seemed to hark back to the Mugabe era, Mnangagwa’s regime will be anxious to provide symbols of movement away from that era — and the fall guy will be Mugabe himself, now an easy target.

“I myself would like the airport to be renamed Herbert Chitepo International Airport — I hosted Chitepo during his Antipodean speaking tour in 1973 — and this would retain some real link with liberation history. As for having many farms, how many farms does one man need? And, as for Grace, every man and woman should face justice,” said Chan.

Political analyst Maxwell Saungweme said it was not wise to target Mugabe and his family.

Saungweme said the whole thing could be a ploy by Mnangagwa whereby excitable sections of the ruling party would say explosive things against Mugabe with the Zanu PF leader stepping in to cool things down to confirm his claims that he is as “soft as wool”.

“The whole thing, as far as Mugabe is concerned might be mere politics meant to paint an angelic Mnangagwa within and outside Zimbabwe, especially after the killing of at least six unarmed civilians on August 1 in Harare.

Saungweme said while Mugabe could get away with it, Grace who is facing assault charges in South Africa is game meat for the authorities.

“Regarding Grace, it’s a different matter. She was hated in Zanu PF by many, and many Zanu PF supporters had drawn the line between her and Mugabe. If Mugabe goes, the likelihood of her being extradited is high, especially after her meddling in opposition politics in the just-ended election,” he said.