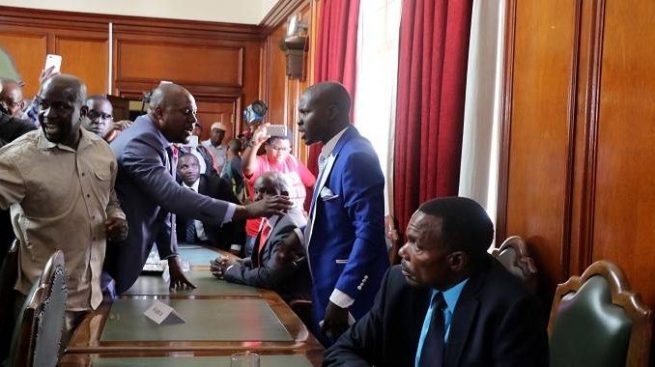 There was chaos here yesterday at the swearing-in ceremony of the newly-elected councillors after one of them, Arnold Batirai of ward 24, decided to take oath of office in Shona.

While all the 28 councillors took their oaths of loyalty and office before Chamber secretary Sikhangele Zhou and Town Clerk Christopher Dube in English, Batirai decided otherwise and used this vernacular language.

The swearing-in ceremony had attracted lot of interest in the city in recent weeks as local activists declared that they would not tolerate a mayor who is not of Ndebele origin.

A day before the swearing-in ceremony, WhatsApp messages circulated urging residents to come and defend their “culture and integrity.”

They indeed came out in their numbers but unfortunately the public gallery in the council chambers could not accommodate all of them, hence they had to wait outside while the proceedings went on.

However, trouble started towards the end of the ceremony when Batirai who had arrived late for the ceremony decided to take his oath of office in Shona, much to the resentment of the residents.

Ironically, Batirai first took the oath of loyalty in English which the rest of the councillors had used, but surprisingly went on to recite his oath of office in Shona.

This did not go down well with the residents who immediately interjected using tribal slurs arguing they were being taken for granted.

As soon as the town clerk ordered the media and residents to leave the house for a closed door session with councillors, angry residents immediately bayed for Batirai’s blood, charged towards him and started manhandling him in a scuffle that lasted nearly 15 minutes.

The councillor, however, refused to be intimidated as he defended himself saying it was within his Constitutional rights to use any local language.

The madness, however, came to an end as council officials including the town clerk ordered everyone out of the chambers.

As if that was not enough, the residents demanded that the first full council meeting slated for Tuesday at the same venue be moved to the Large City Hall in order to accommodate the large numbers of residents who could be interested in attending the ceremony.

It will be at the same ceremony where the mayor and his deputy will be elected under the supervision of provincial administrator, Khonzani Ncube.

The residents in their numbers waited outside making bold their statements that they would not tolerate anyone who disregards them on tribal grounds.

“There is nothing wrong in what one of the councillors did; it’s within his constitutional right. Our Constitution recognises 16 languages so anyone is allowed to use any of those languages,” Zhou said.

Asked if the council is going to bow down to the demands by the residents to shift the next council chamber meeting to the Large City Hall, Zhou said: “It is unfortunate that we cannot shift from the chambers because that’s our venue where we hold council meetings.”

She, however, said they do not have the power to stop anyone from attending the meetings as the residents had a right to do so.