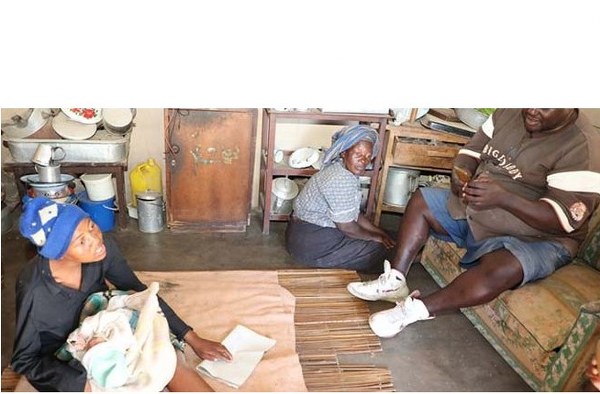 A NEWLY-BORN baby girl miraculously survived after her disabled mother dragged her by the neck for about 200 metres and buried her alive in a shallow grave before being intercepted by a close relative.

The infanticide attempt occurred last week and has set tongues wagging in Zimunya where villagers describe it as taboo, unprecedented and wicked.

The baby instead escaped with lacerations all over the body after being dragged while nake_d. The postpartum mother Ruth Kazibone (25), of Chitora Village under Chief Zimunya, had concealed her pre_gnancy until she went into labour, delivered alone and tried to kill her newly born daughter.

Ruth is disabled and her endurance and courage to kill the baby has shocked many. In an interview with The Weekender the crutch-aided Kazibone admitted to both concealing the pre_gnancy and attempting to kill the baby. The woman, who also has one paralysed hand said she dragged the child for about 200m before digging a shallow grave using her left hand.

She had no crutches then, and as such had to tie the baby with a rope and drag her. Ruth said she made several failed attempts to abort the pre_gnancy, after which she opted for the idea to conceal the pre_gnancy and killing the baby after birth. She alleged that a local traditional healer Mbuya Kwembeya gave her some herbal concoction to drink before advising her to kill the child after birth.

Mbuya Kwembeya refuted the allegations. “It is true that I tried to kill the baby. I got that advice from Mbuya Kwembeya. She is the one who advised me to bury the child dead or alive and keep the gruesome act under wraps so that the traditional medicine is not weakened.

“All I wanted was to kill the baby because I cannot look after her. Look at me, I only have one hand and one leg; how will I look after the baby? I was impr_egnated, for the second time, by the same man who made me pre_gnant when I was staying with my parents, so I was ashamed,” she said.

Ruth, however, showed contrition for trying to kill the innocent baby and wants the child and community to forgive her. When contacted for comment, Mbuya Kwembeya vehemently denied advising Kazibone to kill the child.

“She came here looking for help and I helped her. Ruth was crying and I helped her because of the state she was in and now she is pointing an accusing finger at me. She wanted medicine that I usually give to expectant mothers so that they give birth smoothly and that is the concoction I gave her.

‘‘It ended there, and at no point did I advise her to kill the baby. She is merely looking for a scapegoat and I cannot allow her to lay blame for her actions on me. No,” the traditional healer hits back.

Buwerimwe said she was shocked by Kazibone’s determination to bury the baby alive.

“Nobody suspected that Ruth was pre_gnant. She stays with her brother who advised me that she was not feeling well, prompting me to rush to their homestead to check on her. On arrival I was greeted by a pool of fresh blood strewn around the yard. I then followed the trail of blood to where Ruth was and was surprised to see her burying the baby alive. At first I thought she had stolen the baby, but it them came as a surprise that she had given birth and was trying to kill the child by burying her alive in a shallow grave. The baby’s umbilical cord had been cut using a dry maize stalk, so heartless,” said Buwerimwe.

Kazibone’s lover, Happy Zengeya said he had not been informed that she was pre_gnant and that he did not want anything to do with the baby. He reacted violently when the baby and the mother were brought to his homestead earlier that day. He claimed that he had paid lobola for her but Ruth’s father Elliot Kazibone said he had only paid damages for impre_gnating their daughter three years ago.

“She never told me that she was pre_gnant yet I paid lobola. She went on to try and abort the pre_gnancy behind my back. I am so angered and because of that I chased them away when they came to my house with that baby earlier this morning. Vaakuchida kundipa chitunha manje, munhu ambobva kumakuva (they now want to give me a corpse) I do not want her, they should have used the proper channel,” he said.

He however, said he was relieved that the child had not died and that if proper channels were used by his in-laws to inform him of the new baby, he would accept her.