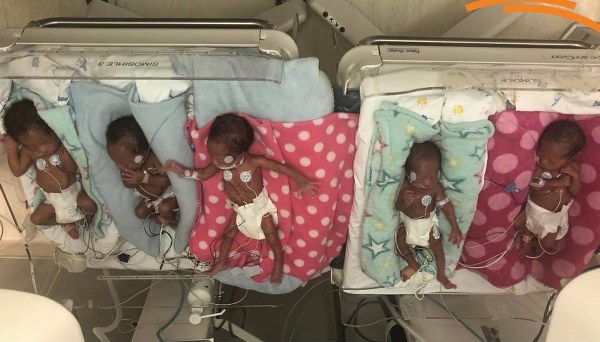 Welcoming a new baby into the family can be a daunting experience, but how about five babies – at the same time?

This is exactly what happened to the Buthelezi family from Sunward Park, in Boksburg, on Thursday last week.

Known as quintuplets, the five newborns were successfully delivered to mum Jabulile at the Botshelong-Empilweni Private Hospital in Vosloorus.

The Clinix Health Group said on its Facebook group: "Well done to Dr Moeng Pitsoe and the medical team at Clinix Botshelong Empilweni Private Hospital on the successful delivery of our newest members of the Clinix Family. Join us as we congratulate the proud parents and wish them all of the best for the future!"

Speaking to TimesLIVE on Thursday morning‚ Dr Moeng Pitsoe chuckled as he recalled how Joe had to be assisted to his seat when he realised that he was now a father to five newborns.

"Three is a lot but they had prepared for that. So when number four and five came‚ he almost collapsed‚" Pitsoe said.

This is the fifth set of quintuplets born in South Africa since 1960.

The team who delivered the quintuplets was 100% South African.

"Once again Clinix has delivered on its commitment to providing quality, affordable healthcare to peri-urban communities. We wish the parents and the healthy quintuplets all the joy and happiness," said Dr Khamane 'Kop' Matseke, Clinix Health Group CEO.

According to TimesLIVE, the names of the babies are Siyanda, Sibahle, Simesihle, Silindile and Sindisiwe.

Augustine Buthelezi, the babies' father, told Kathorus Mail the couple had been expecting three babies, as this is what the scan had revealed. The other two must have been "hiding", Buthelezi quipped.

Buthelezi said he was also the father of 23-year old twins from a previous marriage.

According to the hospital, the babies were born after a 30-week gestation by Caesarean section.

Pitsoe told the Kathorus Mail that the babies and mother were doing "extremely well" and that they would be going home once they each weighed 2kg.

On Thursday, nappy manufacturer Cuddlers offered to supply nappies to the Buthelezis for 12 months.

On its Facebook page, Cuddlers posted: "We wish the Buthelezi family the greatest of blessings for the happy journey ahead. Unfortunately, this journey will come with unavoidable expenses to keep these little treasures happy and healthy, especially in their first year. We would like to eliminate the expense of nappies, and so we would be honoured to take care of all their nappy needs for the next 12 months."