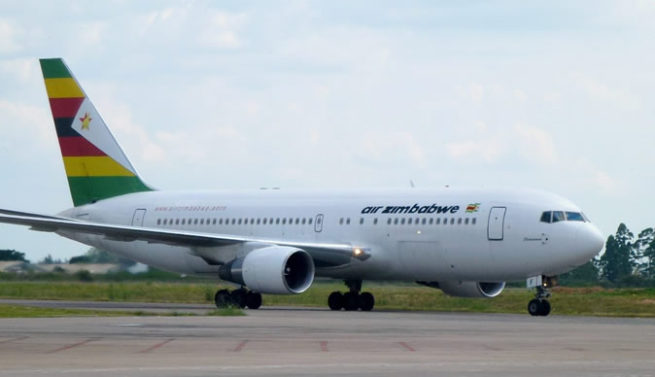 An Air Zimbabwe plane aborted take-off from OR Tambo International Airport – apparently because of a battery problem and under-fueling.

Time stood still for dozens of passengers on the Boeing 767-200 aircraft on September 14 after the plane sped down a runway and just before lift-off the captain applied the brakes.

Among the passengers on flight UM462 to Harare was former Minister of State for Masvingo Province Kudakwashe Bhasikiti, who was returning home from graduating with a PhD from the University of KwaZulu Natal.

Bhasikiti told ZimLive that passengers immediately knew there was a problem when the captain fired up the engines.

“We boarded at about 1830hrs. When they started the engines, there was a very strange sound, the kind of sound that you get when you start the engine of a ramshackle car and it is failing,” Bashikiti said.

“It was so bad people were looking at each other laughing. Someone remarked that we should get down and push the plane.”

The former Mwenezi East MP said the pilot proceeded with take-off procedures and soon, the plane had left its bay and lined-up on the runway.

“He did about 400 or 500 meters at full throttle, and then suddenly the captain applied the brakes and brought the plane to a crawl. By now we were all terrified. He pulled off from the runway and we all desperately wanted to know what was going on.

“The captain’s voice came on the intercom to tell us that we couldn’t take-off because our aircraft needed to be attended to by engineers. He said there could be a problem with our battery or fuel.

“I couldn’t believe that they wanted to get us in the air with a faulty plane with deficient fuel.”

Bhasikiti said the aircraft was parked in a temporary bay and refuelled. Engineers attended to the other problems.

The plane was finally cleared for take-off at 2029hrs and landed in Harare without incident at 2214hrs.

Bhasikiti said he was a “hopeless optimist” for Zimbabwe’s future which is why he still flies Air Zimbabwe despite safety concerns, but he is still furious they came close to a disaster.

“Why should someone experiment with our lives? Planes must be able to show technical readings when they are still on the ground, including fuel levels. There was the give-away noise when the engines were started and surely that can’t be the normal sound of the plane’s engines, somebody should have intervened earlier,” he said.

Air Zimbabwe had a largely unblemished flight history, but warned that the crisis at the airline which is down to two aircrafts “makes it possible for the unexpected to happen.”

Air Zimbabwe had not responded to our written enquiries.