Deputy Minister of Information, Publicity and Broadcasting Services Energy Mutodi has confirmed that Minister of Foreign Affairs And International Trade Sibusiso Moyo was indeed admitted at the Avenues Clinic.

The retired Lieutenant-General did not travel with President Emmerson Mnangagwa last night when he left for New York to attend the United Nations, General Assembly. Moyo is reported to have suffered renal complications leading to his hospitalisation.

Unfortunately, this resulted in massive speculation with some people quarters claiming that the minister was in critical condition while others claimed that he had passed on.

However, writing on Twitter on Thursday morning, Mutodi said that Moyo was recovering well from a minor illness. Said Mutodi,

I have visited Minister SB Moyo at the Avenues clinic this morning. I can confirm that he is recovering well from a minor illness. 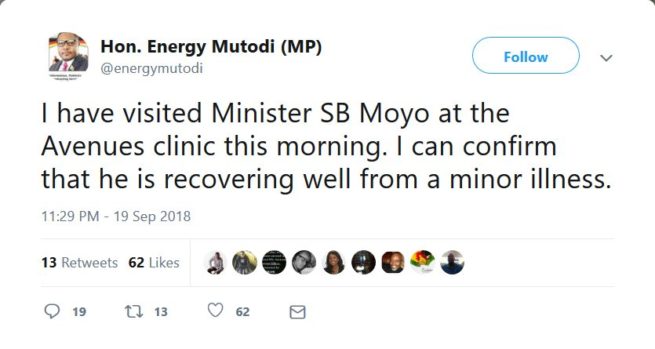