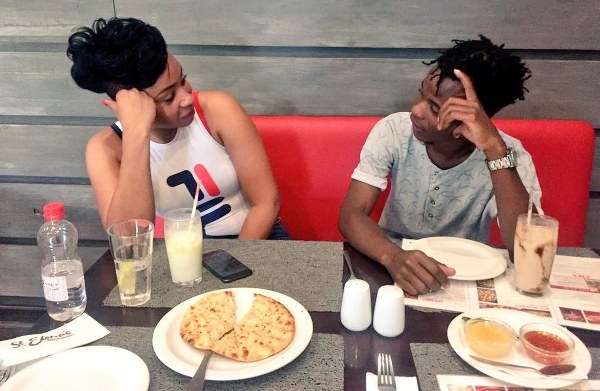 CELEBRITY Pokello Nare yesterday said she does not like being called a socialite as she only graces public events when paid to make an appearance.

In a chat with Star FM’s V Candy, who is standing in on the 326 Express slot, Pokello said she is not that sociable and would rather be looked at as a top celebrity with the most following in Zimbabwe.

She said she is not good at socialising.

Pokello also refused to be called a slay queen.

“I don’t know what a slay queen is and I don’t wanna be associated with the term slay queen, I don’t even know what it means.”

Asked what she should be called, Pokello said:

“Business woman, mother, celebrity, I am fine with that. Not socialite …if I’m the most followed person in this country then I am way past a socialite, I am amongst your top celebrities so people need to recognise that.”

She also spoke about being raised on her mother’s side of family, which explains why she last visited her rural home in Gwanda at the age of 15 (she is now 33).

“The boys are doing fine. Nathan is still going strong with his soccer he now plays on the Zimbabwe national under 17 team and Tristan is turning 3, he is in nursery school. Boys are catastrophic, that’s how I can describe them. But you know what, there is nothing special in the world than being a mother, so you always have time for the things you love and my kids especially, there is nothing I wouldn’t do for them so I dedicate my time to them.”

Asked what she can tell other girls who want to start a business, Pokello said:

“You know what start small, if you are passionate about your business you will definitely get there. It’s not always about getting the money to start, you know get yourself connected to people, know a few radio personalities, TV personalities. If you are a designer find those people who can wear your designs and tag you on social media, that’s how you start. You put your brand pout there and your name out there. Do something about it and before you know it you are skyrocketing.”

On a social media “Pokello Challenge”, she had this to say:

“Well I didn’t start the challenge but I understand there is now a Pokello challenge where you basically tweet, facebook or Instagram whatever celebrity crush you have and ask them to go out on a lunch or dinner date with you and I am actually quite surprised because I didn’t realise it was going to trend or go viral as much as it has. I get thousands of tweets and DM’s on a daily basis and I don’t get to see a lot of them sometimes I read 50 at most and I think this young man was just lucky. I was in the right mood and right day, his name is Tatenda and he said to me look can I just take you on a lunch or dinner date because ndikuda kuvhairira ma face angu and I said to myself he is not asking for too much, I had free time so I told myself I am gonna do it.

“I went for lunch with him, he is great guy he was a bit star struck for the first 15 minutes, he didn’t believe that I would actually show up. It turns out he is a loyal fan. He has loved me from the time I was in big brother and he can tell you everything since then. So the conversation just flowed and I started giving him advise career wise and things that’s he wants to do, he is a great guy. I felt good that I took the initiative to meet someone who ideally would have been able to meet me.”

“I think I am crazy about Casper Nyovest. I have met him and I even met him again last week when I was travelling from South Africa at the airport and we were in the same immigration queue for like 15 minutes and I got to talk to him. He was supposed to be coming to Zimbabwe for a show but it got cancelled because of cholera.

“I had seen him before but this was actually my first time to interact with him, I held it together but I am actually crazy about him. I love me some Casper Nyovest.

“I can’t say I have Zimbabwean celebrity crush because all your Zimbabwean celebrities and socialites are my friends, your Jah Prayzah, Ginimbi, Takura, I talk to them, I have access to them on a daily basis and they are more like brothers to me.”

On what she looks for in a man, Pokello said:

“That’s such an interesting question, because with age what I look for in a man has completely evolved. I look for a kind man. Now I definitely look for service before self. I want a man who is empathetic, who is able to take a situation and do something about it.”

Pokello is also happy with the choices that she has made prior?

“I am happy with where I am in life. I don’t regret anything I have done or what I have been through, I feel like everything that has happened to me so far has helped me become the woman that I am today, self-sufficient, independent, unshakable, I am a good mother, I am sister I am a kind hearted woman, very humble with great humility so all those experience have led me to be me and I am very comfortable with the woman I am now.

“I’m sure the Zimbabwean people, the trolls, the haters, are tired, they tried but they are tired now because they have seen every time the try they create a monster in me.”

Asked whether haters influence her in any way, Pokello said:

“No. I hardly pay attention to them, I have been in the limelight for like seven years now so I don’t get phased. I am on the headlines, in the newspapers every now and then, I don’t read it unless someone brings it to my attention. Trust me I’m one person who sleeps at night perfectly, no matter what the headline says.”

Her approach to life has helped her to be consistent as a brand.

“I stay consistent because from when I started have always been true to who I am. There is no fake zone with me, I tell it like it is, I do it like it is. I walk the walk. You’ll never see me try be anything that I am not, fit where I don’t, I stick to my lane and mind my business. I am not accessible to a lot of people and snobbish as that may come off, it helps me a lot because sometimes when you are too accessible people walk all over you, so being inaccessible has helped me stay at the top of my game.”

On how many best friends she has, Pokello said:

“I have six best friends and it’s not like I have these best friends now, but these are women over the course of my life, all the 33 years of my life. All the way from primary school, high school and varsity into my adult life, so they are best friends from different stages into my life.

“Paloma, she has been my best friend since nine years, we went to primary school together. We were both in the same class and for all those years we just hold it down together. She understands me and I understand her. You need a day one, everyone needs a day one.

And her favourite song:

Pokello did not reveal who her boyfriend at the moment is as she found no reason for the public to know.

She also went to on clarify that the picture of her in wedding gown that she posted some time ago and came with a convincing caption was just her doing her job. She did not get married to anyone.

Pokello added that she is a very kind hearted woman and a sucker for perfection as her star sign Virgo says as well as a big ego.