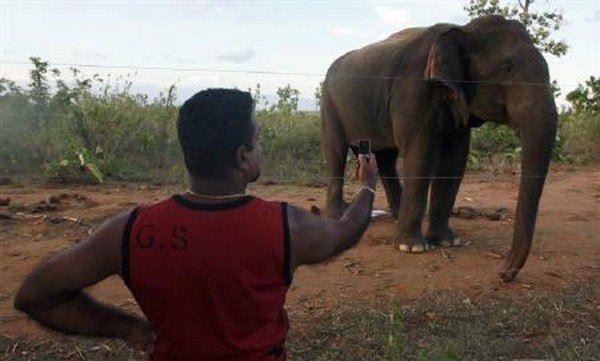 AN unidentified tourist narrowly cheated death on Saturday when an elephant he was trying to photograph in Victoria Falls picked him by its trunk and threw him on the ground before trampling on him.

The man, believed to be German, was in the company of a woman believed to be his wife and were walking along a footpath from a local hotel going towards the Rainforest around 5pm.

The unidentified man broke an arm and leg as a result of the shock incident.

He has curio vendors to thank as they vigorously made noise by clapping hands while one of them also used a catapult to hit a female jumbo and a calf to scare the giant predators away.

“We heard a woman screaming coming from the direction of Lookout Café but we couldn’t figure out what she was saying. When she got here, we suspected something was wrong because she kept mentioning elephants but her English language was not audible.

“We rushed to the scene and saw a man lying on the ground.” said one witness, Anele Mpofu, adding that he had to quickly come up with a plan to save the tourist.

“Seeing that there was nothing we could do, I figured how we could divert the bull’s attention from the scene. I drew a catapult and aimed at a female elephant and calf. I hit the mother on the ear and it turned to protect the calf, in the process making noise by breaking tree branches.

“The bull suddenly turned and ran towards the female and calf probably to protect them and that’s when we all swarmed the man and lifted him as we ran towards a safe place,” said Mpofu.

The man broke a leg and arm while the whole upper body was also covered in blood, witnesses said.

He was rushed to a private hospital in an ambulance.

A senior official from Zimbabwe National Parks and Wildlife Management Authority confirmed the incident saying rangers were on the ground.

A few days ago, another unidentified German tourist was trampled to death by an elephant she was attempting to photograph.

Last year a trained elephant trampled a tour guide in Victoria Falls killing him on the spot.