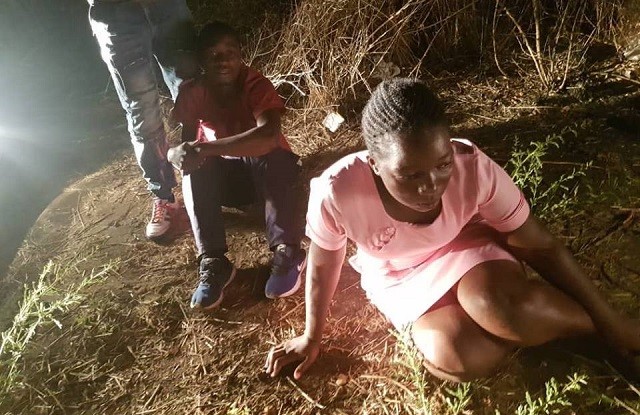 While preparing for her white wedding Sikhanyiso Tshuma was busy cheating on her husband-to-be Milton Furira.

Her cheating game came to a halt when a local prophet found her lying with her face down inside a taxi with the driver behind her driving a se_xual point into her in a bushy area in Bulawayo’s Selborne Park.

The driver, identified as Mafuta would not stop until Johane Masowe Wechishanu church goers in the same bush interrupted. All that was captured in video which has since gone viral.

“I was going for night prayers with some church members and we were shocked to see a taxi parked at the shrine and we became suspicious that there is something wrong going on at our shrine. We moved closer quietly and caught the two having se_x at our shrine where we conduct prayers and deliverance services,” said Madzibaba Mutumwa of the Johane Masowe Wechishanu.

The clip shows the church leader Prophet Madzibaba Mutumwa running after Mafuta who didn’t go far. As punishment church members hit him with open arms while some castigated him for poking someone’s wife and having se_x at a holy place.

Meanwhile, Tshuma became a spectacle of shame as she remained seated while her legs were wide open. Some church members captured her prized assets.

With B-Metro already summoned to the spectacle, she begged this reporter not to write the story.

“Please do not write the story because the story will wreck my marriage. I’m tying the knot on 23 December and as I speak preparations of the wedding event are at an advanced stage. Please I beg you and I can do anything for you,” she pleaded.

Seeing that all was out in the open and the truth would set him free, Mafuta said he had tried and failed to leave Tshuma because of her se_xual prowess.

“I have been having se_x with Tshuma for some time now. I tried leaving her but anodziya (she is good in bed),” said Mafuta.

Tshuma’s husband Furira said he was unlucky in love. His first wife died and he thought he had found a worthy replacement.

“I’m at a loss of words. My first wife passed away and I married this one (Tshuma) and I have three children with her and as I speak we are meant to wed on 23 December. Life is very tough. This has wrecked my marriage,” he said in between sobs.

B-Metro is in possession of the wedding invitation card.