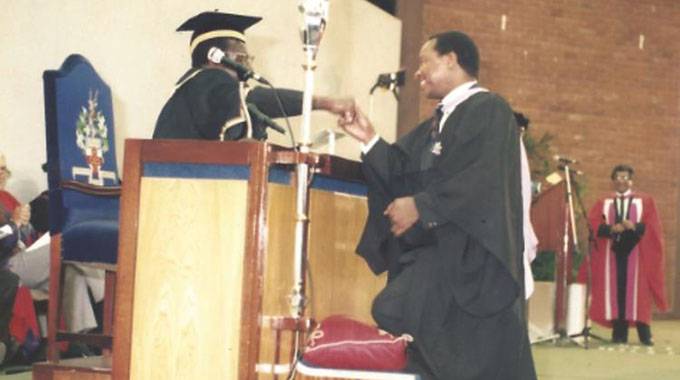 THOSE who have been following health developments in Zimbabwe lately know the marvel that Chitungwiza Hospital was turned into.

Dr Obadiah Moyo, the man behind the institution’s transformation, has been entrusted to repeat the same feat, this time on a national scale.

Born in Gutu in a family of six, Dr Moyo has become the face behind problem-solving in Zimbabwe’s public health sector.

All hope is pinned on him that he will transform the sector to a quality, reliable and people-centred service provider.

Dr Moyo started his medical career as a clinical biochemist with special interest in renal dialysis and was assigned to head the renal services programme in 1981 where he was hands-on in dialysis, providing direct service to renal patients.

He was also the head of laboratory services for the whole of Zimbabwe, overseeing 76 laboratories.

His appointment as head of laboratory services resulted in a lot of modernisation and it was through his efforts that the first HIV testing laboratory was established in Zimbabwe in 1986 and eventually decentralised to all the other laboratories.

He was also clinical biochemistry lecturer.

Dr Moyo’s fame and influence in laboratory medicine spread across Africa and he was elected as the first African on the council of the International Federation of Biomedical Sciences and as president of the African chapter.

He was awarded the American Biographical Institute’s Gold Record of Achievement within the medical sciences and the society as a whole in 1996.

Dr Moyo continued to improve himself academically and in order to consolidate and improve his clinical skills and expertise, he engaged in further medical training and qualified as a mature student in medicine, pathology, clinical and renal sciences. He has extensively published articles in nephrology and pathology in reputable international journals.

In dialysis, besides haemodialysis, he also introduced another form of dialysis called continuous ambulatory peritoneal dialysis.

The Fellowship of the Royal College of Pathologists (UK) places Dr Moyo at the epitomy of pathology on an international scale.

He became the first, and remains the only fellow of the Royal College qualified in chemical pathology in Zimbabwe, which in itself is a feat to reckon with.

Dr Moyo also holds postgraduate qualifications in healthcare administration and published articles on the establishment of the renal programme in Zimbabwe from which he eventually became instrumental in the setting up of five dialysis units geographically located around Zimbabwe.

Dr Moyo told The Herald that one of his challenging assignments in healthcare saw him providing dialysis care and treatment to the late former First Lady, Sally Mugabe, who was battling renal failure.

During those years, the lifespan of renal patients was short due to lack of advanced technology, but Dr Moyo said they managed to prolong the late Sally’s life for up to 11 years on dialysis.

“My first challenging assignment was working with the late wife of the former President Robert Mugabe when she was battling renal disease. We managed to push her life up to 11 years, which was double the expected duration of patients on dialysis,” said Dr Moyo.

Because of being deeply involved in healthcare administration for close to 35 years, Dr Moyo said he opted to be in full time healthcare management, using his academic medical qualifications as a source of knowledge and innovations.

This rare combination of skills saw him creating the best hospital in Zimbabwe, which has become an envy for the rest of the region.

In 2005, he was assigned to head Chitungwiza Central Hospital.

The facility had just been upgraded from a general to a central hospital and was a typical picture of most public health institutions in Zimbabwe.

Staff complement did not match the growing burden of care, resulting in long queues and slow pace in assisting patients.

Equipment was obsolete, characterised by repeated breakdowns. Drug shortages were also the order of the day, the same way other public health institutions were affected.

Untidy and dingy corridors, unwelcoming wards with a collection of patients, lack of privacy and uncomfortable metal beds were the norm at Chitungwiza Central Hospital before Dr Moyo’s arrival.

“We had limited financial resources. Sanctions hit us badly, but still I managed to come out of it and produced the best possible results through a cocktail of innovations. The hospital became the best public health institution in the country and the only one that is ISO certified,” said Dr Moyo.

Through dedication, commitment and hard work, he managed to bring quality service to the hospital. His administration saw the institution’s transformation from a sorry state to a hospital of choice, whose services were now at par with private institutions in the country — a level that no other public health institution had ever reached in the country.

In 2008, the hospital acquired the Standards Association of Zimbabwe’s ISO 9001:2000 certification.

“ISO is all about quality and innovativeness. We worked outside the box. We did not just wait for Government to prop us up and also went out looking for funds from the corporate world. That was our attitude. Our attitude was not shying from begging,” added Dr Moyo.

Still at Chitungwiza, Dr Moyo tried to set up a renal transplant unit as a permanent solution to dialysis.

In Zimbabwe, Dr Moyo’s name is synonymous with dialysis.

Apart from initiating the process of kidney transplants at Chitungwiza Hospital, Dr Moyo also had a hand in establishment of renal units at Parirenyatwa, Mpilo, Gweru and Mutare hospitals.

Several local, regional and international organisations and universities have researched on the Chitungwiza Central Hospital’s model and recommended it for its adoption for implementation Africawide.

On September 7, 2018, when Dr Moyo was appointed Minister of Health and Child Care, work was still in progress to complete establishment of the kidney transplant unit at Chitungwiza Central Hospital.

His new ministerial position was not smooth sailing either.

“Now I got this position and landed into cholera. God gives me challenges and I work on them, so I survive on challenges. When there are no challenges, there is no work,” said Dr Moyo.

Apart from cholera, Zimbabwe’s public health sector has been struggling to provide enough drugs to patients.

It has also been characterised by repeated strikes by critical staff such as doctors and nurses owing to poor working conditions, among other challenges impacting on service delivery.

The burden of care continues to grow owing to increased population and new emerging diseases against limited financial and human resources.

Dr Moyo said he was confident that through his leadership, most of these challenges will come to pass.

“I want to end cholera and all the other related medieval diseases. The cholera vaccine that we are currently rolling out is the first step in the right direction. We will soon be having the typhoid vaccine.

“We want medicines and surgical sundries to be available to the population.

“We are busy working out a plan on how to stock medicines in our public institutions as well as in the private sector. We want to see provision of services, to ensure that our workers are well looked after, and that the environment in which they work is conducive by providing them with all the relevant tools of the trade,” said Dr Moyo.

He said as someone who came through the system, he fully appreciates that there was nothing frustrating as working in an institution without drugs and with obsolete equipment.

“I have come through the system and I know exactly how it feels like not to have the key medication and enabling equipment at your disposal,” he said.

Dr Moyo said it was this experience and lessons picked during his stint in the public health sector that makes him a befitting candidate for the Health and Child Care Ministerial position.

“For me, it’s a matter of applying corrective measures and doing the right thing,” he said.

He said his vision was a five-star quality public healthcare system which is people-centred and also caters for vulnerable populations such as people living with disabilities, the elderly, children and the economically disadvantaged.

Dr Moyo is married to Lucy Memory and they have four children.

Man in trouble after he dumped wife after discovering that she had a ‘secret’...