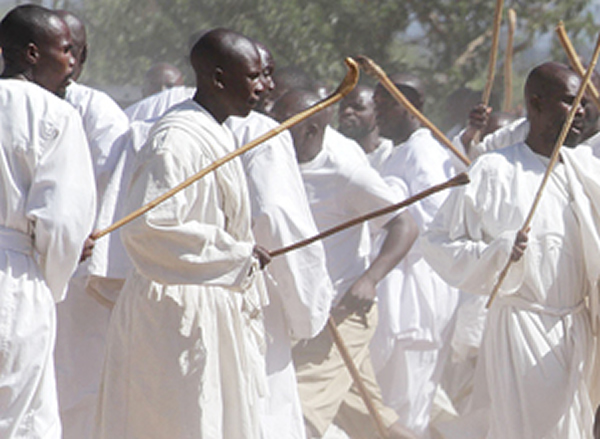 THERE was chaos at an apostolic sect shrine in Budiriro which left many casualties and one admitted at Harare Central Hospital on Saturday.

Two groups fought over residential stands in Budiriro with members from Madzibaba Enock – Herbert Senda, 36, fighting in one corner while the others were from the vice chairman Clifford Chimusoro’s camp.

H-Metro attended the scene where we interviewed Madzibaba Enock of Johane Masowe eNyenyedzi Nomwe who said was shocked after learning that their shrine had been attacked.

“I am shocked after receiving the report from our congregant Nyikadzino Chingoma who watches over patients at our shrine that our shrine was under attack.

“Many were injured as these intruders were shouting that they had come to finish everything once and forever.

“Unfortunately, I am still here in Nyamakate, Hurungwe for our annual Passover,” said Madzibaba Enock.

He also narrated how his shrine and co-operative started.

“We formed this Johane Masowe Housing Cooperative in 2015 but started staying at this shrine in 1999.

“We even tried to apply to Zvimba Council for a response to own this land for development from 2006 to 2010 and we later discovered that this land was under local government.

“We then submitted our papers with the Local Government for recognition at that place.

“Finally, we were regularised by the City of Harare by the end of 2015, meaning I am the founder of this Johane Masowe YeChishanu YeNyenyedzi Nomwe Housing Cooperative, a corporative from my church; our aim being to make sure that all congregants without houses benefit from this shrine’s cooperative after contributing money.

“The likes of Clifford Chimusoro were already converts in 2015 when they came to our church.