Deputy Minister of Information, Publicity and Broadcasting Services Energy Mutodi who is also a key Mnangagwa ally has threatened to withdraw government subscriptions and adverts from AMH titles.

Writing on the Twitter microblogging site, Mutodi hit out at AMH owner Trevor Ncube telling him he was not “clever.” 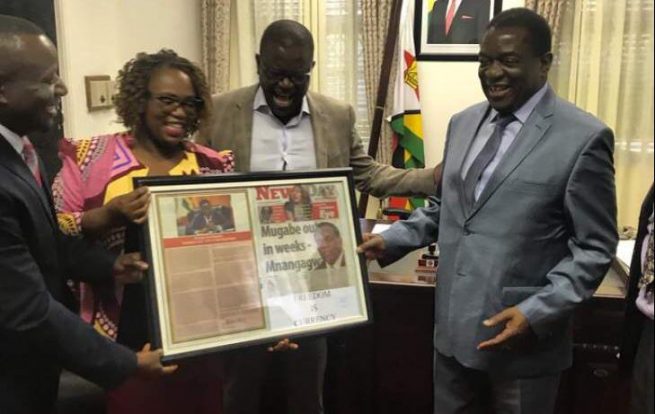 “If Trevor Ncube continues with his thoughtless rants against licensing authorities, government will be forced to instruct all its departments and parastatals and associated companies to stop adverts and subscribing AMH products. You are just Trevor Ncube not Clever Ncube,” Mutodi wrote Saturday afternoon.

Ncube (pictured 2nd right) has fallen out with some Zanu PF power players after doubling the price of his newspapers in response to increasing costs.

Youths in two trucks went on the rampage on Friday, seizing and burning AMH titles. They were promptly arrested. Ncube claims the attacks were incited by Mutodi who had condemned the price increase.

The AMH stable publishes the Independent, Standard and Newsday newspapers.