Popular young opposition leaders from East Africa are uniting with like-minded colleagues in West and Southern Africa to form a movement to challenge the misrule that has plagued the continent.

Kenyan legislator Babu Owino said in a talk late Friday with Ugandan pop star-turned-opposition figure Bobi Wine (whose real name is Robert Kyagulanyi Ssentamu) and Kenyan activist-turned-politician Boniface Mwangi that they are reaching out to South Africa’s Julius Malema and Zimbabwe’s Nelson Chamisa, among others. 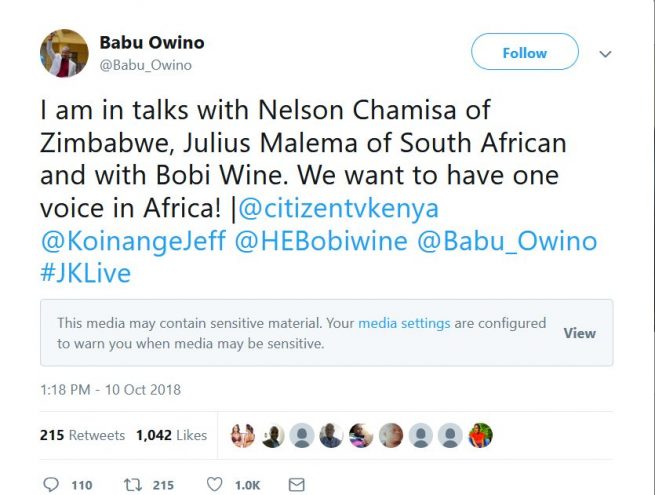 There’s a deliberate effort in Africa by senior politicians to distance youth from politics and governance, yet 70 percent of the continent’s population is below the age of 35, said Ssentamu.

Ssentamu, a lawmaker since last year, says he’s fighting for freedom from oppression and wants 74-year-old Ugandan President Yoweri Museveni, in power since 1986, to retire.

Ssentamu is facing treason charges in Uganda after being arrested and tortured for allegedly organizing the stoning of the presidential motorcade.

The government denies allegations that Ssentamu was tortured. Ssentamu said he was happy to speak freely in Kenya because in Uganda police would violently disperse any of his public meetings. He said never wanted to become a politician but he felt he had been complaining for too long.

Mwangi said despite Africa’s people mostly being young, the majority of the continent’s leadership was elderly.

“Who are they speaking for? They are stealing, looting and borrowing heavily,” said Mwangi.

He urged young people to actively engage in politics, run for office and make changes from within rather than simply complaining from the outside.

“Silence makes them think you are not feeling the pain,” he said.

Mwangi, who last year lost his first attempt running for a legislative seat, said young people must not be afraid to lose in politics because it’s a learning process.

“When you are young, they can break your bones but not your spirit. It’s time to break bones!” he declared.

Ssentamu also urged young people not to get discouraged about making their voices count.

“When you fall, get up and walk. Clean yourself on the way,” he advised.