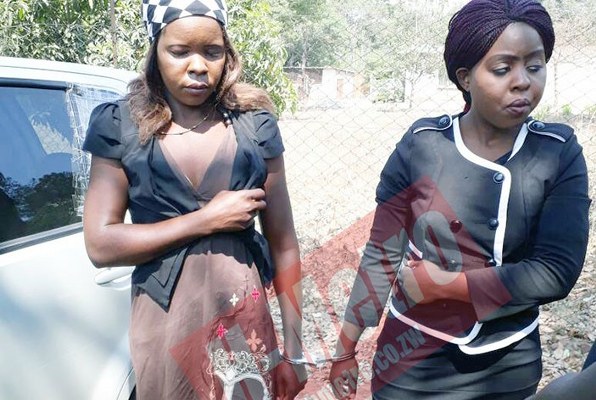 TWO women and a man suspected to have been preying on unsuspecting worshippers, mourners and wedding guests in various parts of the country were arrested on Sunday.

Maria Kagwa (35) and Violet Jaure (28) both of Chitungwiza have been visiting different churches in Harare, Chitungwiza, Dema, Chinhoyi and Guruve pretending to be worshippers at churches, mourners at funerals and guests at weddings while making away with handbags among other valuables.

The two would search the handbags and steal cash, cellphones and other valuables which they then gave to Danmore Tsimba, 37, of St Martins for sale.

The three are detained at Waterfalls police station after their luck ran out at Glad Tidings where they were spotted.

“The Zimbabwe Republic Police would like to confirm the arrest of two women and one man suspected to have been stealing hand bags to unsuspecting worshippers in various churches during services around the country,” said Chief Insp Mupita.

“The duo confessed to have been carrying criminal activities since 2016 and one claimed to have learnt it while she was in one of our neighbouring countries.

“We want to thank members of the public for leading our officers with information that led to the arrest of the suspects.

“Investigations are continuing and the three are expected to appear in court tomorrow (today),” said Chief Insp Mupita.

In an interview with H-Metro, Violet, a cross border confirmed stealing several handbags saying she was introduced to Danmore by one of her friends and recruited Maria into the activity.

“I have been stealing handbags since 2017 after learning it in South Africa where I was living,” said Violet.

“We would pretend to be a worshipper and take front seats and would steal bags during prayers or when one left her bag going to the toilet.

“When I left the country Maria carried on with the job and Danmore would sell the cellphones on our behalf and we shared the money.

“We dump the bags after searching them and this has been our business for the past year,” said Violet.

Danmore confirmed dealing with Violet and Maria arguing that he wanted to fend for his family since he was not employed.

Maria refused to entertain H-Metro and remained calm while shying away from the camera.

The two would even steal from their relatives.

A congregant who witnessed the incident at Glad Tidings Church in Waterfalls said the two women came in as visitors and no one knew them prior.

“The two ladies arrived during prayers that are conducted before the service between 8 and 9 am.

“The prayers are done in the prayer room adjacent to the church where some women had left their handbags, so while the prayers were ongoing, they proceeded to the church and started going through people’s bags while stealing some bags as well.

“It is quite fortunate that someone, and I don’t know who exactly had identified the culprits and their car so a search party was sent out to find them.

“It is by the grace of God that we found them parked at Waterfalls shopping centre separating the valuable items like money, bank cards and phones from the bags and because it was a few meters from the Waterfalls police station, we rushed to inform the police who pounced on them while they were still emptying the bags.

“It is not the first time that we have had theft cases in our church and we would like to believe that they were involved in those cases,” narrated the congregant.